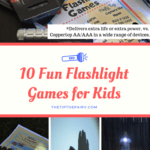 This story was produced in partnership with Duracell. All opinions are mine alone.

10 Flashlight Games for the Kids

Ever since my kids were little, they have LOVED flashlights — all four of my kids. It’s crazy! They can spend so much time just playing with flashlights, from making shadow puppets to playing tag together. 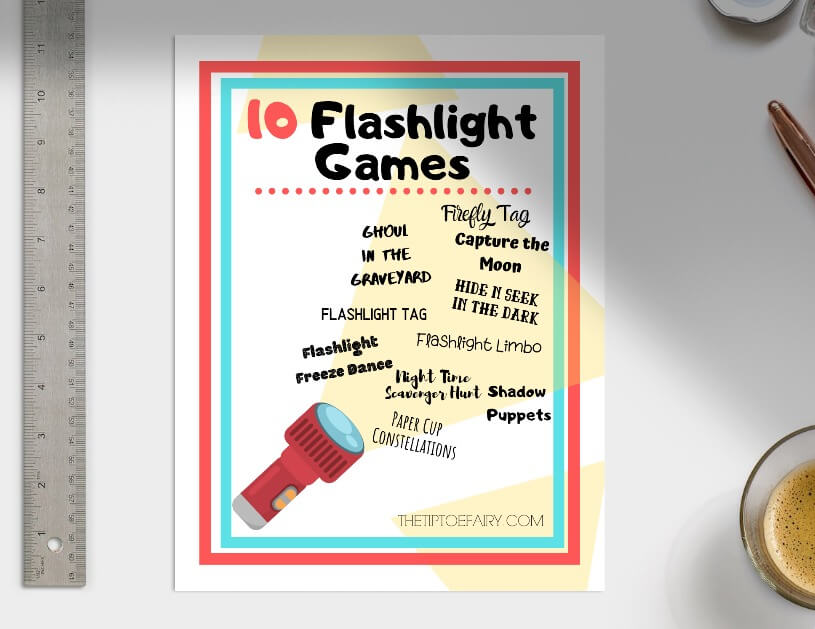 We even gave them flashlights and headlamps in their Christmas stockings, and they just love it.

Check out these 10 totally fun flashlight games you can play with your kids or they can play with siblings and friends. Many of these are great for parties and sleepovers.

Ghoul in the Graveyard

This is a game you can play a few different ways. It’s also been called a few different things, such as Ghost in the Graveyard, The Ghost is Out, or The Witch is Out. We like to play it at night with flashlights. It’s best played with several people in a big open space.

First, you’ll decide what is home base, such as a tree, a structure on the playground, or side of the house, etc. Then, the ghoul goes off to hide. Everyone else is given a flashlight, and using their flashlights they go look for the ghost.

The first person who finds the ghoul is safe and yells “GHOUL IN THE GRAVEYARD” and stays with ghoul. Everyone else runs back to home base before being caught by the ghoul. The person caught by the ghoul will now play the “ghoul” in the next turn. Continue playing until each person has been the ghoul.

This game is best played in a big open space. This is a version of tag played opposite the usual way of tag. The “firefly” will get the flashlight and run off and hide. Once the game starts, the firefly will flash the flashlight off and on once every 30 seconds. Then, the other players will run to try to tag the firefly.

Whoever tags the firefly first wins and gets their turn to be the firefly. Continue playing until everyone has had a turn.

Hide and Seek in the Dark

This is best played inside in the dark or in an area outside with lots of hiding places. The seeker is given a flashlight and the hiders run off to hide. The seeker must count to 30 before going on a hunt to find the hiders. Using the flashlight, they seek everyone until they are found. Take turns until everyone has been the seeker.

Have the lights down low and turn the music on. One person will be “it.” Everyone will be allowed to dance for a minute or so, then “it” will shine the flashlight on someone and they will have to instantly freeze. They’ll continue shining the light on different people until everyone is frozen. If someone cannot freeze, they are out. Play until the song is over or everyone is out.

Lay on the bed or sit in a dark room with the kids with an open space on the ceiling or wall. Everyone will take turns making shadow puppets on the wall. It’s even better if you can make funny voices with your puppets.

This is best played with a lot of kids in a big open area outside. The person who is “it” will have a flashlight. They will begin chasing everyone, and to catch a person, they will shine the flashlight on them. They continue shining the light on different people until everyone is caught. The last person caught is “it” for the next round.

This game is for the crafty people. Each person will take a small paper cup and poke holes in the bottom of the cup to form a constellation.

This is best played with a fairly strong flashlight that has a beam you can see. Using the flashlight beam, each person will try to bend under it without falling down. Each round, the beam gets lower and lower until there is one winner.

A night time scavenger hunt is just the thing to do on a warm summer night with a flashlight in your hand. It brings a whole new world to your child like spiders actively making webs and the lights of an airplane crossing the sky.

Just check off each item as you find it.

Download your copy of 10 Flashlight Games below! You’ll get a 12-page eBook full of ideas, and it even includes circles of constellations to tape and punch the holes for the paper cup constellation game.

How to Make Tie Dye Socks