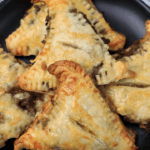 Need a savory snack for your Halloween party? These Halloween Witch Hat Savory Meat Pies will do the trick. Each witch hat is full of a savory ground beef and onion filling. This post contains affiliate links.

Ingredients for these Witch Meat Pies

How do you make these Savory Witch’s Hat Pies?

You can simple cut a template from freezer paper and cut the witch hats from the pie crusts, or you can use a witch hat cookie cutter.

Roll out the pie crust dough. Cut the witch’s hats out. You should be able to get 12 total.

Add the onion, olive oil, and ground beef to a skillet and cook until the ground beef is browned on high.

Combine the gravy mix and water and pour it into the ground beef mixture. Mix until everything is well combined.

Bring the mixture to a low boil and reduce the heat to low medium. The gravy will thicken around the meat.

When it’s thickened, remove from heat.

Place 1-2 tablespoons of meat onto one witch hat, then place a second hat on top. Do this for all six witch’s hat pies.

Press the sides down with a fork to seal each pie.

Beat an egg in a small bowl and use a pastry brush to brush egg over the top of each pie.

Bake for 12 minutes or until lightly browned.

Remove from the oven and let cool.

You might want to serve a dipping sauce or two with these meat pies. Here’s a few ideas:

Can you make these Witch Hat Pies ahead of time?

Personally, I think they are best made right before serving. But, you can make these ahead of time, store in the fridge or freezer, and reheat in the microwave or air fryer when you’re ready to serve.

How do you store leftover Witch Hat Meat Pies?

Store the leftover meat pies in the fridge in a sealed container for up to 3 days. Reheat in the air fryer or microwave for 30 seconds to 1 minute.

How to make Homemade Vanilla Extract – perfect for gifting