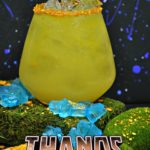 My son loves comic book characters, and I love him telling me the whole stories behind different characters.  Lately, we’ve been researching Avengers Infinity War Thanos and where he comes from and what he’s all about.  So, I put together a fun little Thanos Mocktail!

Did you know he comes from Saturn’s moon Titan? There were other Titans who came from there, but apparently, he killed most of them. He has two daughters, Nebula and Gamora, who apparently he basically stole and then adopted.

He’s a bit mysterious, but do you know when Thanos was first seen in the movies? It was actually in the credits in The Avengers, the first movie!  He was Loki’s benefactor.  He was played by another actor back then, but since Age of Ultron he has been played by Josh Brolin.

Any ideas on who is not going to make it out of Avengers Infinity War? I have no idea.  According to my son, when Thanos filled the gauntlet with the Infinity Stones in the comic books, no one made it out alive except his daughter, Gamora.  She took one of the stones and made time go backwards to revive everyone.  This sounds like it’s not looking good for the Avengers.

I love having fun themed drinks for new movies, and this one did not disappoint.  It’s perfect for the kids, and perfect to go along with Avengers Infinity War Thanos.  This recipe will make 1 glass of this yummy Thanos Mocktail.  You can double or even quadruple to serve more.

For this recipe, you’ll need to make a simple syrup, which is basically water and sugar. I make it easily in the microwave, you can check it out in this recipe to make your own.

Blueberry Limeade in the Blender

Shrimp Italiano in less than 5 minutes