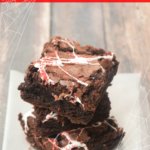 This post contains affiliate links.  Have you seen Spider-Man into the Spider-Verse? My kids are obsessed with this movie. We’ve rented it twice now and watched multiple times, so for our most recent viewing I made Spider-Man Spider Web Brownies.

I think I’m going to have to buy this movie.  Most of the time, we just watch movies on our streaming channels, but they absolutely LOVE this movie.  My 9 yr old LOVES the soundtrack and has it on Spotify.  She plays it all the time, especially as the official DJ of the minivan.

I know, I know, everyone is talking about the Avengers: Endgame movie, and it does, in fact, have Spider-Man in it.  My husband and son were there on opening night seeing it together.  I personally haven’t seen it, and with little kids, I usually see those movies when it gets to Redbox or Netflix.  But, Into the Spider-Verse has just captivated all of us.  My 9 yr old even got her big sister home from college to watch the movie with her, and she ended up loving it, too.  So, if you haven’t seen it, watch it with your kids!

These brownies are a super easy to make because it’s just a box brownie mix (or feel free to use your favorite from-scratch version).  The fun of these Spider-Man Spider Web Brownies is the cool technique to make the spiderwebs.  I have seen this technique for years for decorating cakes for Halloween, and I thought it would be perfectly appropriate to try it on some brownies to celebrate Spider-Man.

The secret to the spiderwebs is using marshmallows.  You throw some in a bowl and heat it for 30 seconds and stir it up. If you notice the consistency in the photos above, you’ll see what is too cooked and what is just right.  You want it starting out somewhat gooey, like when the marshmallows are “almost” ready to add to the rice krispies.  I did discover if you use Fiestaware bowls, they get too hot in the microwave and will make the marshmallows too hard.

How to Make Spider Webs from Marshmallows

This video will show you how I create the spiderwebs stretched over the brownies.

One thing I did learn is don’t do this with more “cake style” brownies. It works better with fudgy brownies because the cake style will crumble when the marshmallow stretches and pulls on it.

You will melt some marshmallows for just 30 seconds and stir them up.  Then, give it about 30 seconds to a minute so they can cool off and not burn you.  You will then get a small pinch (smaller than you think) between your thumb and forefinger and begin stretching it.  Then, add your other thumb and forefinger and keep stretching more until it’s wide enough to wrap around either sides of the brownies.

This will take practice, but you’ll get it pretty quickly.  Just keep stretching to thin out the marshmallow.  As you get more confident, you’ll be able to stretch the web across different directions and on three sides of the brownies as you want to get the web as thin as possible to look like spider web.

You’ll just keep doing this until you’re happy with how many spider webs are on your brownies.  Then, pop it in the freezer so you can harden those marshmallows.  I found if you don’t do this step, when you’re ready to cut the brownies, the spider webs just kinda pop off every which way.  I also found using a knife you’ve run under hot water helps cut the sticky marshmallows quicker and easier.

These Spider-Man Spider Web Brownies are easy and fun to make and the perfect treat for a Spider-Man or Avengers movie.

I also recommend running your knife under hot water to help with cutting the sticky marshmallows.

How to Make Your Own Shopping Cart Cover

Must Haves Goodies for the New Mom from...

Tangled Before Ever After DVD