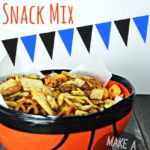 This shop has been compensated by Collective Bias, Inc. and its advertiser. All opinions are mine alone.

It’s “crunch” time for basketball season, and what’s more fun than a little get together to watch one of the big games? I’ve got a fun, festive way to make your basketball watching party so much more with Cheez It! 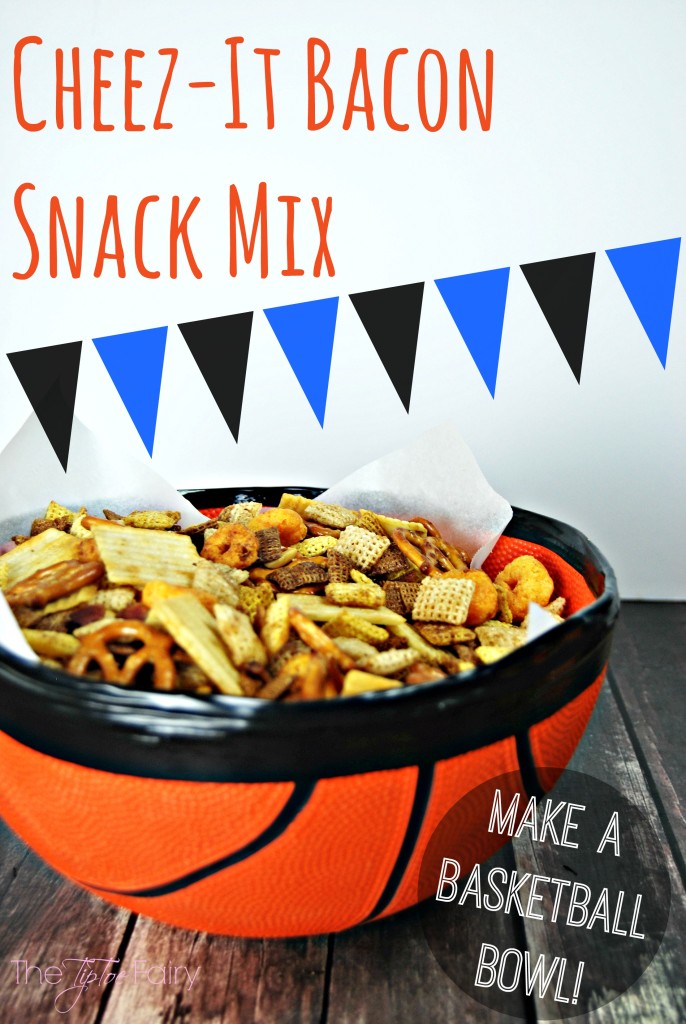 Do you have an old basketball laying around? I’m going to show you an easy way to turn it into a bowl for snacks with some simple supplies you probably have laying around. Then, for our new bowl, I’m going to share one of my favorite snacks – Homemade Cheez-It Bacon Snack Mix.

When I decided to make my DIY Basketball bowl, I thought we had an old basketball hiding in the back of a closet, but I was wrong. So, I headed to Walmart and bought a cheap one ($5!), and I grabbed all the supplies for making my snack mix, including Cheez It Crunch’d and Cheez-It Grooves. 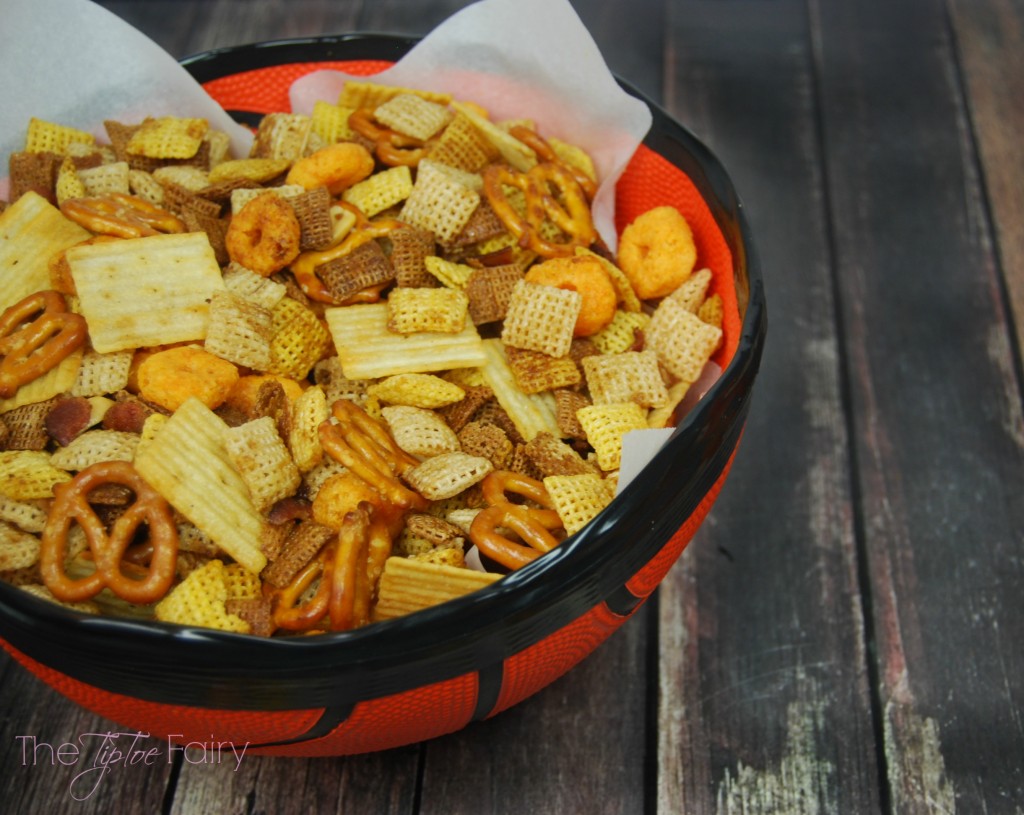 Now, let’s get the snack mix going, and then while it’s baking we’ll make the basketball bowl.  I like to use a roasting pan when I make this snack mix.  It’s easier to stir when I add all the ingredients.  First, I combine all the cereals – rice, corn, and wheat squares and mix them up. 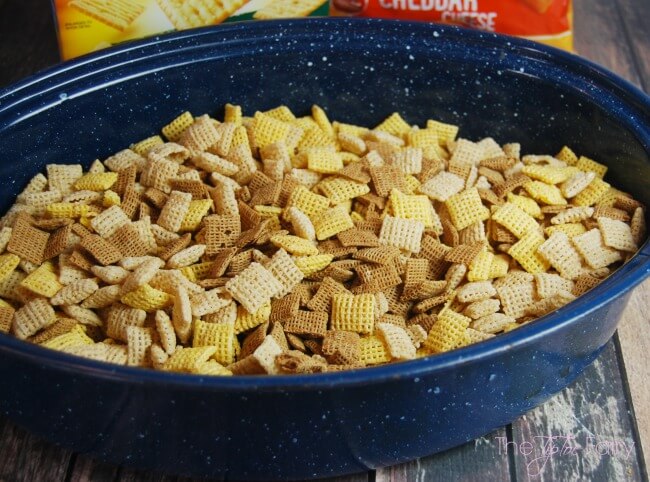 Then, I pour in 1 cup each of Cheez-It Grooves in Sharp White Cheddar and Cheez-It Crunch’d in Cheddar Cheese. 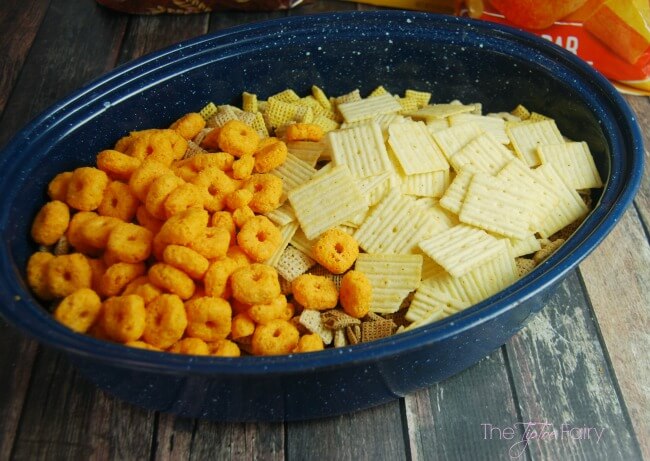 Next, I add 1 cup each of pretzels and peanuts. Nate loves bacon, so I decided to take this snack mix up a notch by adding bacon.

First, fry up the bacon, sop up the grease with a paper towel, let it cool, and then crumble it. Then, add it to the mix. 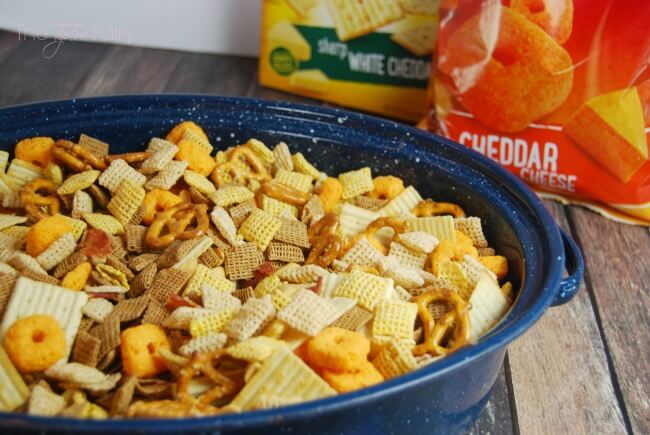 When I’ve mixed it all up, I make a batch of seasoning to pour all over the mix, and then stir it up again. Then, it’s baking time. 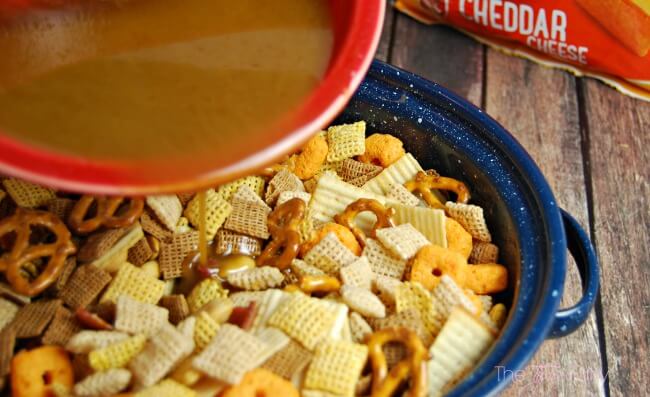 Snack mix taken up a notch with bacon 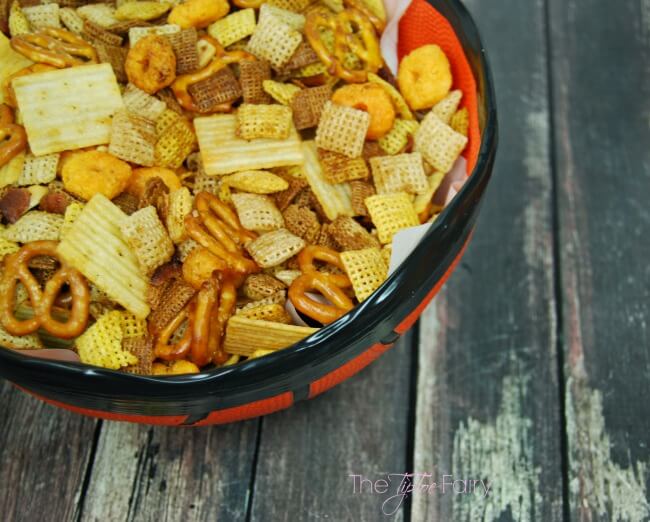 Now that you’ve got the snack mix into the oven, we can make the Basketball Bowl! It’s surprisingly easy. 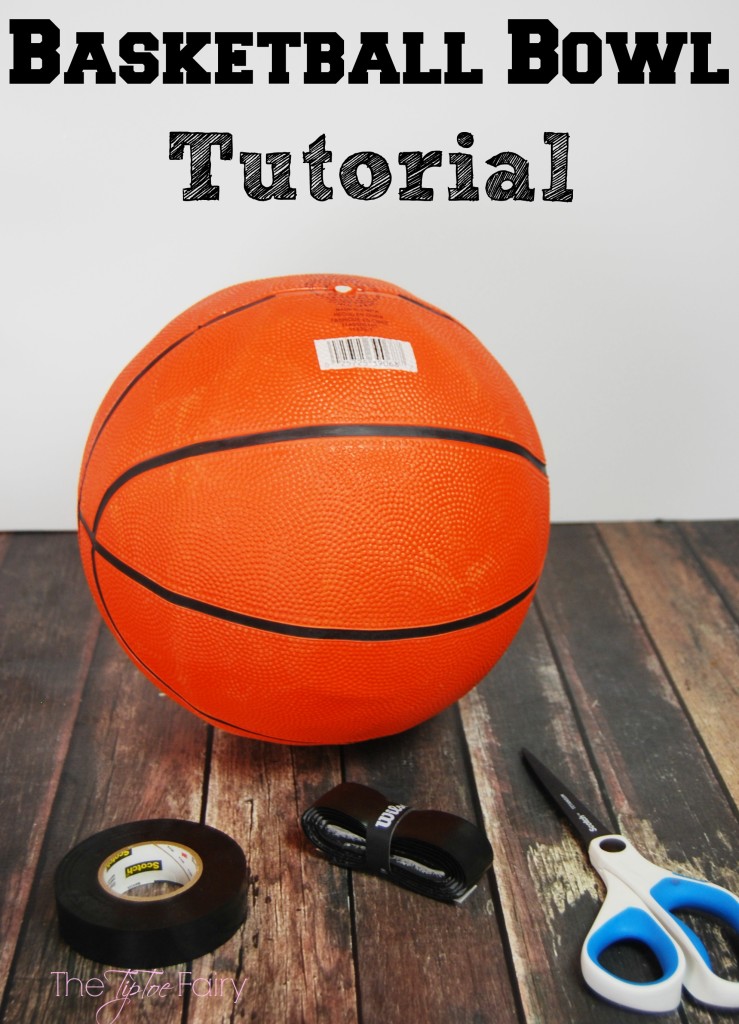 1 basketball – washed with soap and dried.

1.  I’m sure you’ll notice the tennis racket grip in the above picture.  It did not look good once I added it, so I went with just electrical tape. 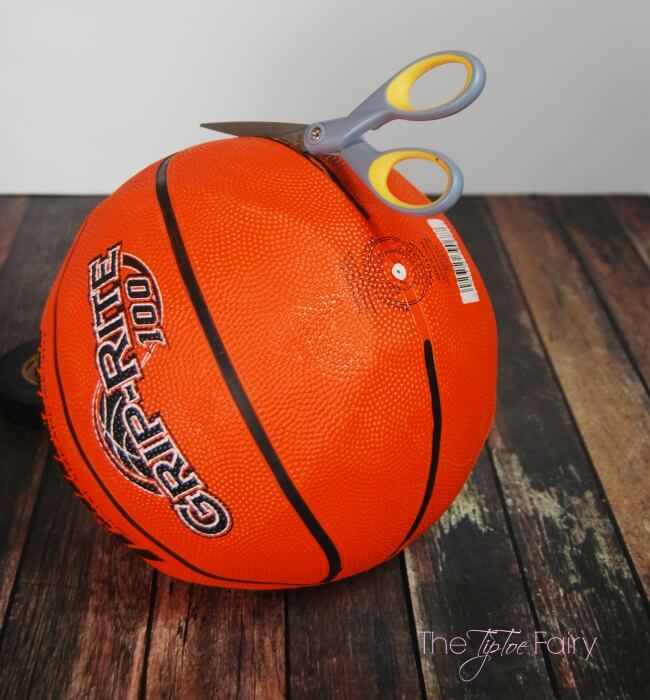 2.  First, you’ll need to stab the basketball right in the black line that goes around the middle, where the hole for the air is. 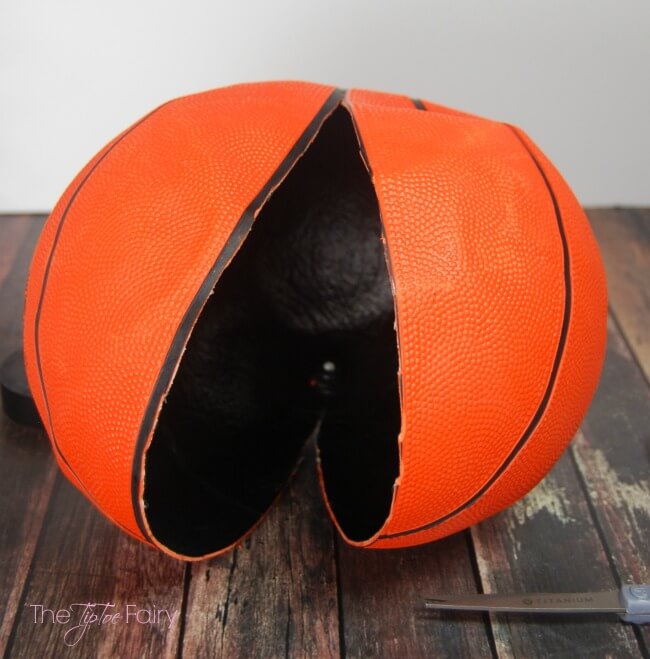 3.  Once you’ve made the first cut with a knife, you can cut around the middle with a pair of scissors. 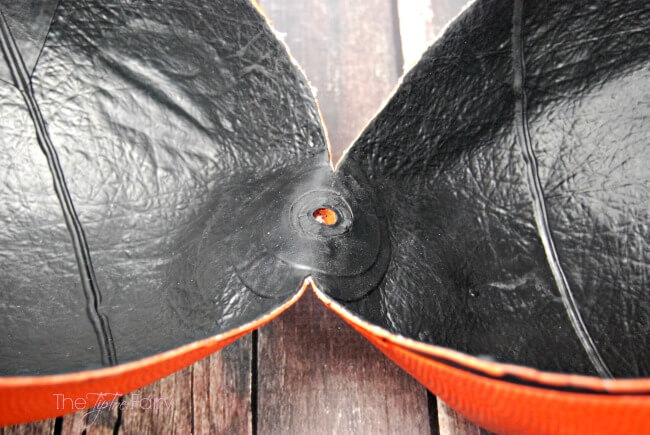 4.  Stop when you get to the air hole.  It will need to be sawed off until it’s flush with the inside of the basketball, or your bowl will be very lumpy there.  Nate is stronger than me, so he sawed it off easily with the knife. Then, snip the ball into two pieces with the scissors, right there. 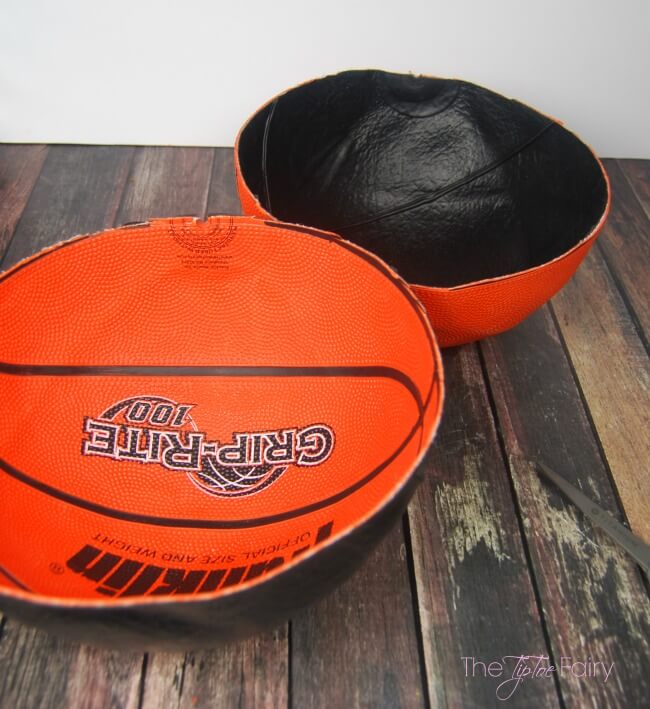 5. Now flip one side of the basketball so that it’s inside out. 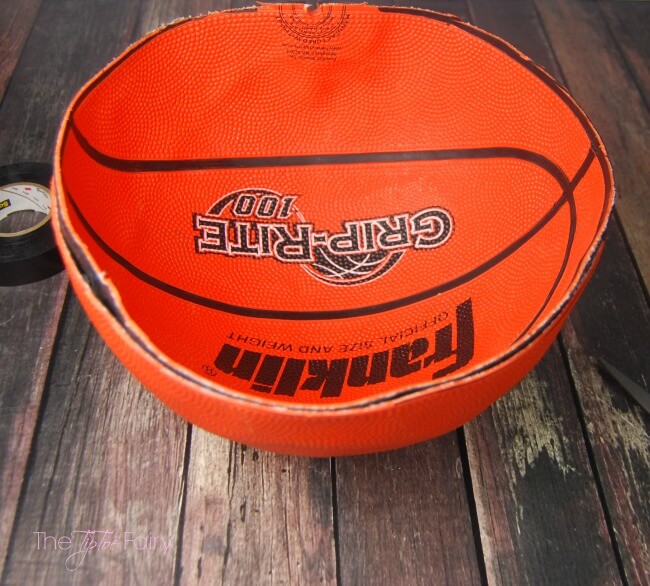 6.  Insert the inside out piece into the other side and try to get the edges to line up as close as possible.  Mine was probably 1/2 inch or so off, but that’s okay, we can fix it. 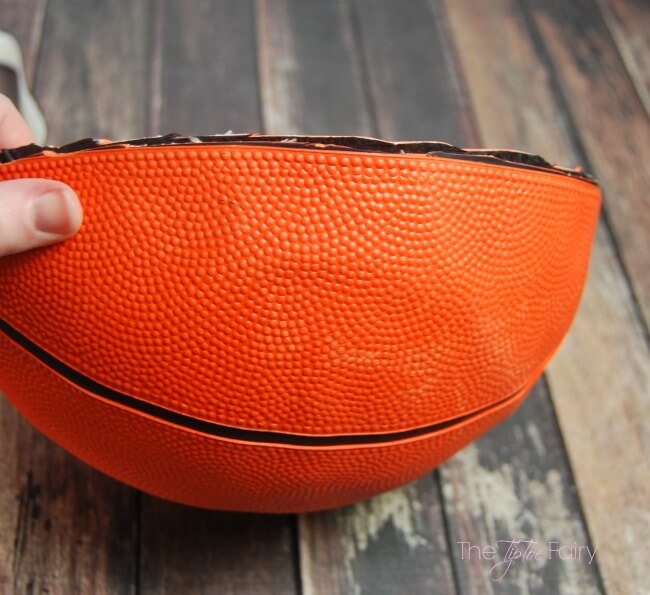 7.  Take the scissors around the edge and snip off the edge to match raw edges together. 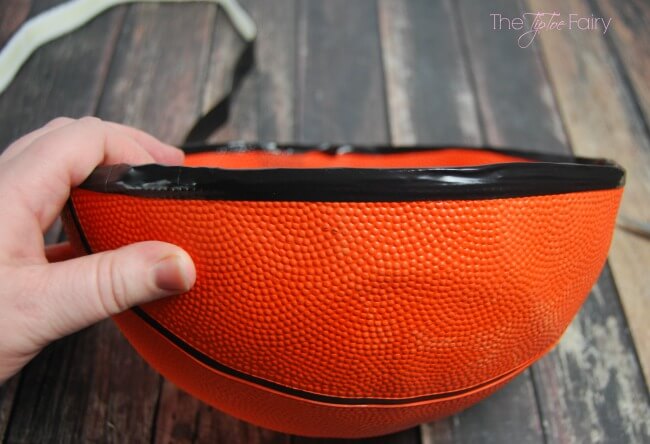 8.  Now take a piece of electrical tape and go around the raw edge, all the way around.  Cut off the excess. Then, fold the sticky edge inward.

9.  Go around the inside edge the same way and fold the sticky edge outward. 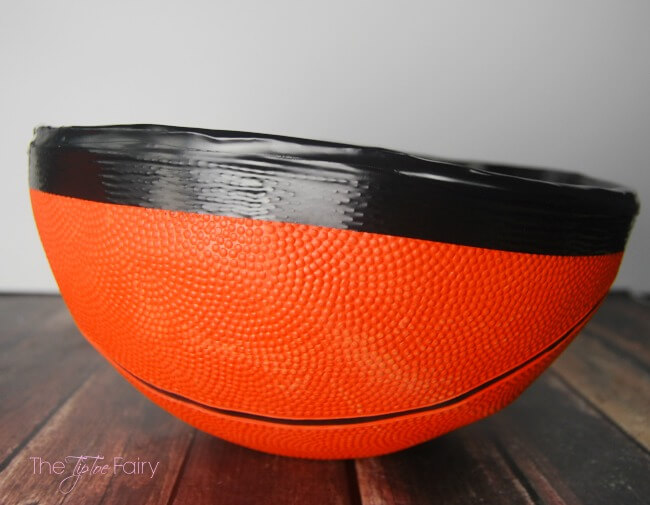 10. Lastly, go around the bottom of the outside edge, stretching as you tape to even out the edge and make it look nice.  Once you’re done, run your fingers all around the tape to make sure it’s all stuck down.

11.  Add a piece of parchment paper or wax paper and fill your bowl with some delicious Cheez-It Bacon Snack Mix. 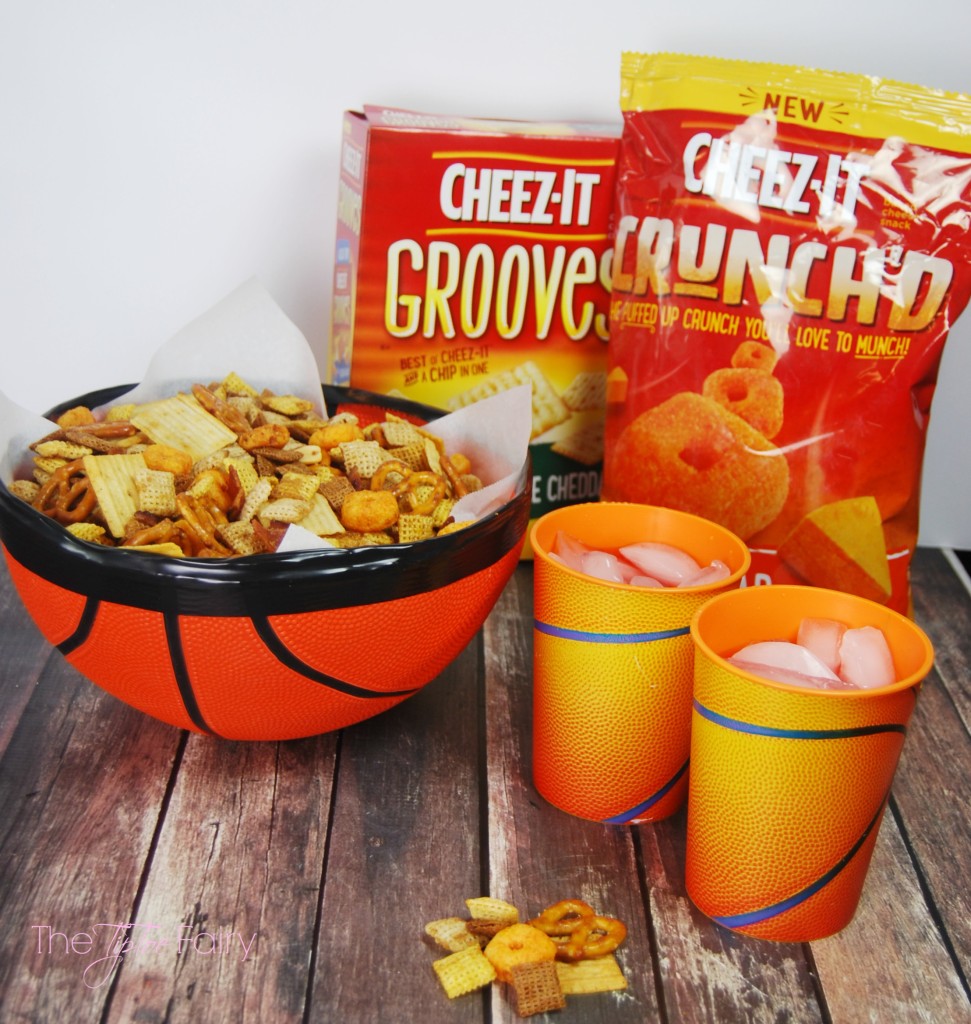 I have to say I love this basketball bowl.  The rubber grips perfectly in your arm, on a table, the couch, or anywhere. My family thinks it’s totally cool, and everyone had to hold it for a few minutes.  They loved the snack mix and devoured it this weekend, including Nate who I found picking every last piece of bacon out of it!

Fresh Pizza Dough You Can Freeze

Oh my gosh, how cute is that bowl!? And I can never leave snack mix alone…yours looks yummy.

Omg. You are killing me! THIS looks absolutely to die for – I live for Cheez-It’s but I can’t get them in Italy! Pinning this for when I get back to America!

This looks so good and the basketball bowl was super easy. I came over like this is going to be too much and I am not crafty but I can totally do this lol

That basketball bowl is perfect!! How creative!

This is so cute! My little boy LOVES basketballs. If it sticks, we may be having him a bball party in October! I will definitely have to remember this. The snack mix looks delicious! I love cheese its!

Basketball is my favorite sport and I’ve always wanted to see the insides of a basketball! You always come up with THE BEST craft ideas! And the snack mix looks delicious! I’m so making it to snack on during the sweet 16!

Love the idea of using an actual basketball for the bowl. Must try this Cheez-It Bacon Snack Mix recipe because I do love anything with bacon in it.

The basketball bowl is perfect for watching the game and snacking on snack mix! #client

This is cute and creative idea.