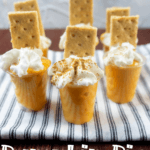 Here’s a fun twist on pumpkin pie for the holidays! Make some Pumpkin Pie Shots! You can make them with or without alcohol, so everybody can enjoy them! This post contains affiliate links.

What do you need to make Pumpkin Pie Shots?

Plus, if you want to make the alcoholic version, you’ll need horchata liqueur.

Can you make Pumpkin Pie Shots without Alcohol?

Yes! The basic recipe is made non-alcoholic. So, this is a kid-friendly holiday drink!

Can you make Pumpkin Pie Shots with Alcohol?

Yes! The recipe includes how to add horchata liqueur to the recipe to make it alcoholic.

It’s a creamy rum-based drink that tastes of vanilla and cinnamon.

How do you make Pumpkin Pie Shots?

Next, we’ll add the pumpkin and spices. Whisk in the pumpkin puree, cinnamon, and ground cloves.

If you would like to make these with alcohol add 2 oz horchata to the mix as well and whisk everything together until it’s well combined.

Fill the shot cups with the pumpkin mix.

Top each glass with whipped topping.

Top off with a graham cracker.

Chill until ready to serve.

Can you make these Pumpkin Pie Shots ahead of time?

Yes, prepare the pumpkin mixture up ahead of time and go ahead and put it in the glasses.

I would recommend making the mixture up a few hours early, but not the day before.

When you’re ready to serve, add the whipped topping, cinnamon, and graham cracker.