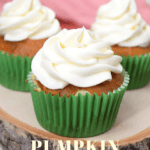 During the holiday season, I find myself making a lot of cupcakes for potlucks, especially for my husband’s office.  These Pumpkin Cheesecake Cupcakes are hands down an office-wide favorite.  Other favorites I tend to make are Bubblegum Cupcakes, Cinnamon Roll Cupcakes, or Gooey Caramel Apple Cupcakes.

My husband’s office has a big fundraiser every year during the holidays for the Coats for Kids program. They basically have a dessert auction. My husband and other people at work bring in boxes of homemade treats and everyone bids on them. This post contains affiliate links.

These Pumpkin Cheesecake Cupcakes have become world famous at my husband’s office. My husband starts the rumors that the cupcakes have arrived, and people run down to start bidding on them. There are actual bidding wars for these cupcakes!

How do you make Pumpkin Cheesecake Cupcakes?

They are a basic pumpkin cupcake with a hidden vanilla cheesecake center. When they’re cool, I top them in a cream cheese buttercream frosting.

I have a set of three different scoops for all kinds of things from cupcakes to ice cream, and I use them all the time when I’m baking.

For these Pumpkin Cheesecake Cupcakes, I use the small and medium scoops.  I use the medium scoop to add a layer of pumpkin batter, then a small scoop of the cheesecake batter, and then, one more medium scoop over the top of that.  It fills the cupcake liners about 3/4 full by doing this method, and they come out just perfect.

Sometimes I get the cheesecake batter not completely center, so it ends up a little on the side.  That is totally not a big deal if that happens to you. The cupcakes still come out just fine.

My husband does not have a sweet tooth.  I know it’s hard to believe, but surprisingly, he usually skips the desserts.  However, if he gets his hands on these Pumpkin Cheesecake Cupcakes, he can devour half batch by himself.

You are going to love how perfect this frosting goes with the cupcakes.  The whole thing is just perfection.

I put the cupcakes in the fridge so that frosting will stay nice until it’s time to deliver them to my husband or serve them at the dinner.

And, this cream cheese buttercream frosting is also perfect for so many other desserts.  I had a bit leftover from this recipe and used it on banana cookies and turned them into banana moon pies.

Can you make Pumpkin Cheesecake Cupcakes ahead of time?

You cannot go wrong with these Pumpkin Cheesecake Cupcakes for part of your holiday dessert table.

5 Steps to Start a Blog

Wow these sound so yummy!

Not sure what is going on with the comments above about genital warts, but your cupcakes look delicious! Thanks for the chuckle too!
Thanks for linking up to the party!
Stacey of Embracing Change

These are positively legendary! Thanks so much for the recipe!

I love pumpkin anything during the holiday season! Even alllll the way to Christmas! Especially with cream cheese. Totally drool-worthy!