The other day I was wishing that cinnamon rolls weren’t so hard to make.  I hate making them — really I do.  I’ve tried “quick” and “easy” cinnamon roll recipes. They are one thing I’d rather not make.

Guess what? it worked! And, they are amazingly delicious!  They taste like a cupcake, but like a cinnamon roll as well — like eating a really soft and fluffy cinnamon roll.  So now we have another fun Crazy Cupcake flavor from a Box!! 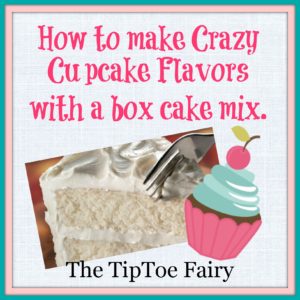 This recipe made 24 cupcakes, so I sent the majority of them to my husband’s office on Friday.  They were a big hit!  In fact, Nate thinks they might have replaced the Pumpkin Cheesecake cupcakes as the all time favorite at his office.  He got a lot of compliments and a few requests to move in with us 😉  I think you will love these and so will your recipients.

They are super easy to make and just wonderfully moist and delicious. Make sure you use a yellow or butter cake mix.  Adding sour cream to the batter thickens it up so the cinnamon/sugar mixture doesn’t just completely fall to the bottom of the cupcake.  There will be extra cinnamon/sugar mixture left over that you can put into a ziplock bag, snip a tiny corner that you can squeeze over the frosting for a cinnamon-y taste.

To finish your cinnamon roll cupcakes, make a cheesecake buttercream frosting.  I used the frosting from my Pumpkin Cheesecake cupcakes, which you can find here.  I made a small swirl to look like a cinnamon roll on each cupcake, then I piped the last of the cinnamon/sugar mixture to finish them off.

A Recap of Christmas

How to make Edible OREO Spider Webs for...

These look divine! I never would have thought to make cinnamon rolls into a cupcake, but that’s an amazing idea! I always find cinnamon rolls just a little too big, so a cupcake size would be perfect! Pinned!

These looks delicious and easy. I may have to try these soon. And they would have to go to work as well because I can’t have something like that hanging out at my house!!

Stephanie, these look delicious and so easy. These are a muffin ‘comfort food’ must have.
Pinning and sharing.

These look absolutely delicious. And the best thing is that they are really easy to make. Thank you for the great idea!

I’m (almost) embarrassed to say that you have me drooling over here. These are gorgeous and look amazingly tasty!

Oh wow, Stephanie. These look AMAZING!!! Can’t wait to try them! Glad to co-host with you at the Foodies and Crafties Soiree!

Stephanie – These look AMAZING! I have to figure out how many Weight Watchers points these are! Whatever they are they look worth the points! Thanks for sharing at the Foodies & Crafties Blog Hop! I can’t wait to see what you link up next week! #foodiescraftiessoiree Thanks for linking up with the parties I co-host throughout the week! You know I love your posts darlin!
Have a terrific weekend!
Cathy
APeekIntoMyParadise.com

I am also doing Weight Watchers and would be interested in the points for these.

I would love you to come and share @ Craft, Create & Inspire linky party !!!

Look forward to seeing you there 🙂

These look delicious! They would definitely satisfy any cinnabon craving LOL! Great recipe, pinning this to make soon!