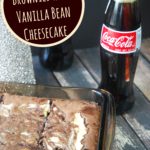 This shop has been compensated by Collective Bias, Inc. and its advertiser. All opinions are mine alone.

Have you ever had a Coke de Mexico Coca-Cola? Lucky for me, I live in Texas, where we can find these all the time.  Coke de Mexico is made with real sugar and not high fructose corn syrup.  They are delicious!

You can find them in a case at Sam’s Club with the other Coca-Cola products.  It’s a real treat when I bring these home.  Everybody knows how good they taste.

I bought a case to have for a little holiday party.  The 24-packs are perfect for your holiday gatherings!  You can also find 4-packs of 2-liter Coke and Diet Coke at a special price of $3.98 at Sam’s Club during the holiday season.

I also had grand plans to upcycle the bottles into something perfect for gift giving.  I thought a set of Coca-Cola glass bottles filled with infused vinegar and oil would be a great gift. Before that, I used a bottle of Coke to make Coca-Cola Brownies with Vanilla Bean Cheesecake.

I bought the big box of brownie mix they have at Sam’s Club.  I made the recipe for cake-like brownies, but instead of the liquid, I used Coke.

Then, I whipped up some vanilla bean cheesecake and added it on top and swirled. Cheesecake swirled brownies are my favorite dessert.

Oh my gosh, these are so good.  And, whenever I make them, they disappear in a flash!

Brownies with Coke and swirled with vanilla bean cheesecake

7 Tips for an Easy Picnic

You are such a genius and I love how you repurposed those coke bottles into amazing holiday gifts. My husband’s favorite treat is brownies and I know your recipe would go over big at my house.

I have never had Coca-Cola brownies before but those look delicious, when I was a kid we lived next to the Coca-Cola factory so we used to have the drinks with real sugar all the time

Wow – those look delicious! I am a sucker for a nice cold Coke. I love that you reused the bottles.

These are really awesome ideas! I’d never heard of Coca Cola brownies before! I definitely have to try them now.

First, you had me at Coca-Cola then you threw in cheesecake. Next I read about a delicious berry vinegar (I LOVE vinegar) and an infused oil (which I like to cook with and use on salad). To top it all off you up-cycled the Coke bottles, genius. My daughter is the tiny queen of up-cycling and she will love this.

You had me at Coca Cola! I’ve never actually cooked anything with cocoa cola in it, but I think brownies would be a great place to start!

Ok brownies and cheesecake are like my two favorite things and you made it with coco cola!? I’m so impressed! It looks amazing!!

The brownies look amazing and I love that you used the bottles again for something different. What a great idea.

Coca Cola is the perfect companion for family meals. It does also make us a good containers for other liquid and gifts.

I love Coca Cola, those brownies look so delicious. I really love the idea you did with the vinegar and oil set. So creative.

There is absolutely nothing better than Coke in a glass bottle!! YUM!!

Call me crazy but I think Coke tastes so much better when it comes from a glass bottle! That dessert looks delicious by the way…

I LOVE reusing/recycling things and making them into new and exciting projects! Love what you did with these Coke bottles <3

I love, love, love the Coke from Mexico! I get mine at Costco (same thing). Great idea to use the bottles for gifts! Always looking for gift bottles. Thanks for the Triple Berry Shrub and thanks for the linky love!!

No idea you could bake using Coca Cola! I guess you learn something new each day. The diy gifts are so cute!

Your brownies look so good! And I love those vintage Coca-Cola bottles. What a great idea for using them. 🙂

Love everything about this post. Being I lived in Atlanta for a while, I’m a coca cola girl. Thanks for sharing these recipes. They look amazing, can’t wait to make the brownies.

I’ve never tried any of these recipes, but I for sure haven’t even heard of coca cola brownies?! I am really intrigued and quite curious as to what those taste like.

How did you seal the bottles?

What fun recipe ideas! I love to make my pulled pork with Coke 🙂 it just tends to add flavor 🙂