How to Sew a Swaddle Baby Doll 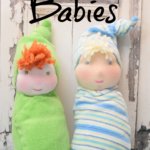 This post contains affiliate links.  If you’ve ever been afraid of making a waldorf doll, but still wanted to try, then a Swaddle Baby Doll is a great way to dip your toe into the process.  It’s very forgiving, and there’s no arms or legs to worry about!

I have made many of these for craft booths and craft fairs over the years.  A Swaddle Baby Doll is the perfect baby for toddlers.  It’s easy to carry, and they can hold their baby just like mommy holds a new baby brother or sister.

If you scan the list of supplies, this might look like a daunting project, but it’s really not.  Swaddle Babies are basically the head and body of a Waldorf doll wrapped in a swaddle blanket.  You don’t even have to make a wig for the doll, it’s just simply a small tuft of hair peeking out of a hat.

How to Sew a Swaddle Baby Doll

Get the Sewing Pattern

Cut a piece of cotton stockinette about 9-10 inches long.

Take your long doll needle and thread it with cotton string. Run a gathering stitch through the top of the stockinette and pull tight, tie off with square knot (I usually tie it off twice to make sure it’s secure).

Flip the stockinette so that the seam is on the inside.

Take your stuffing and tearing 3-4 inch strips, wrap them around.  Wrap until you measure it to be about 10 to 10 1/2 inches in diameter.

Insert the head stuffing into the stockinette/sock and push it all the way to the top.

Since polyfil is more of a loose stuffing, just stuff the sock/stockinette until it feels firm and almost fills the entire length to look like the photo above.

Creating the Head and Body

Tie off the last inch of the body as tightly as you can with cotton string.

From the top of the stockinette/sock and measure down about 4 inches and tie it off tightly with cotton string.  This will form the neck. I usually loop the string around two or three times and pull tight then tie off.

Now there are two parts, the head and neck. Locate the middle of the head and create an eyeline with the cotton string by tying it similar to the neck, but not as tight (as seen in the pic), just enough to form a rudimentary face.

On either side of the head where the face line meets the eye line (wrought where an ear would be), take some neutral thread and sew an “X” shape to keep those strings in place.

Next is the nose. This step is optional because these swaddle babies look good with or without a nose.

Locate where you would like the nose. I usually put it just slightly below the eye line on the face. Take the dollmaking needle and cotton string and run a small gathering stitch about 1-inch in diameter, starting at the bottom of the nose where a “nostril” would be located, and go in a circle all the way around, don’t make the stitches to large because they will break. Before you pull it tight, take the end of your needle and insert the tip of it into the middle of the circle into the stuffing and slightly pull up some stuffing to form the “nose.”

Next, pull the gathering stitch tight, a small nub of stuffing will form into a little nose. As you are pulling tight, if you want more stuffing in the nose, use your needle again to tuft out more stuffing into the nose circle. Then, pull as tight as you can and tie off the string at the “nostril” area.

Take a 10 x 10 inch piece of skin tone knit and wrap it around the doll as shown. I fold over the edge as in the picture so that there won’t be an unfinished edge on the outside of the head. Make sure to pull this tightly, so that later there won’t be extra skin around the chin/neck. Check it by looking at the front of the head to make sure it’s tightening everywhere. When pulling it tightly and folding over the raw edges, sometimes I have to snip off some extra of the raw edge so there won’t be a wide folded over edge.

The top of the head is folded like the end of a wrapped package.

Sew up back of body and head. I start at the bottom raw edge of the body and move up, so that I can continue to sew up the top of the head as well. Every 3-4 stitches, I take a back stitch, so that when I pull it tight, the seam will stay smooth and it won’t pull and gather.

Whip stitch the lower raw edge of the head/body to the stockinette/sock all the way around.

Lastly, tie a piece of cotton string around the neck as tight as you can without making the skin tone knit look loose under the chin.

If you are afraid of messing up your doll’s face,  you can actually skip this step.  Often times Waldorf style dolls don’t have any face at all.  You can just add a little blush from your makeup for the cheeks and be done with it.

To create your face, mark the placement of eyes and mouth with straight pins.  First, place a straight pen at two places in the indented eye line where you want to add the eyes.  Then place a pin where you’d like to add the mouth,

Take about 3 strands of embroidery floss and knot one end.  Thread the loose end through the 3-inch doll needle and insert the doll needle in the back of the head directly where you want the first eye.  Pull the needle through the head to the eye.  Switch your needle to an embroidery needle and then do a satin stitch to form the eye, so you’ll do each stitch right next to each other.  Don’t pull the thread very tight, just enough to lay smooth.  Otherwise, it will bunch up the fabric at the eye.

When you’ve finished one eye, switch back to the dollmaking needle and pull the embroidery thread out the back of the head where you first inserted the thread and tie it off without pulling too tight.  Then, repeat this entire process for the second eye.

I do almost the exact same thing for the mouth as I do for the eyes.  The only difference is I do three satin stitches for the mouth.  I start out with a stitch about 1/2 to 3/4 inch in length, then do 2 more stitches that are gradually smaller to look like a mouth.  Then, pull the thread back through the head and tie off just like the eye.

This is also a step you can skip. I love to add a little hair.  It just gives each doll some character.  I usually use a worsted wool yarn, or mohair yarn, or a cotton yarn, depending what I have on hand.  This takes just such a tiny amount, I try to just use what I have in my stash. 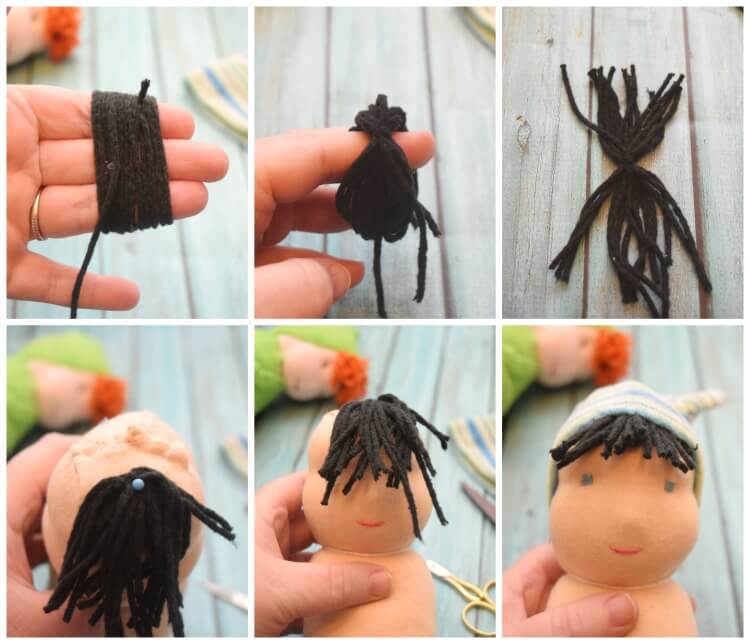 Wrap the yarn around 2-3 fingers about 10-15 times.  Then, take a piece of yarn and tie around the top of the loop of hair at my top finger.  Then, cut the yarn at the bottom of my fingers.

Next, fold the hair in half at the tied knot, and pin it to the top of the doll’s head.  Now whip stitch the hair to that spot several times to secure it.  Now its time for  hair cut to trim it up above the doll’s eyes.

Cut the hat from the pattern piece and with right sides together, sew up open side of the hat.  Turn it right side out, and fold in the raw edges of the bottom of the hat, and then place it on the doll’s head so that the little tuft of hair sticks out.

Now using your sewing needle and some coordinating thread, sew around the entire hat.  Make sure to add some back stitches around the hair, so it’s really secure there.

Tie the top of the hat in a knot.

For the hat and swaddle, I love to use something super soft like cotton stretch velour. It’s usually 80% cotton / 20% polyester.  You can also find bamboo velour which is 40% bamboo, 40% cotton, and 20% polyester, but there are many other fabrics.  You could use flannel or minkee, or a cute baby knit.  Just make sure it’s thick enough so the fabric doesn’t show the body of the doll through it.

Folding the swaddle as you sew it closed may take some practice.  There is not really a “wrong way” to sew it.  You just want to fold and sew to secure it so the child cannot remove it.

Cut the fabric to the size according to the pattern, and prepare a sewing needle with a long thread that coordinates with the fabric with the ends knotted together. Lay the doll body just slightly to the right of the middle.

Fold the bottom up, insert the needle where you can easily hide the knotted end, and whip stitch the raw edge to the front of the bottom of the body.

Flip the baby over to the front and keep tucking and folding the raw edges inward and keep sewing small stitches to sew the left side of the swaddle down on the baby.  Then, sew it down along the folded edges that should be folding over to the right side and back down to the bottom.

Tuck and fold the last raw edges down at the bottom like shown and then tie off securely.

Add blush to the doll’s cheeks if you desire, and now your Swaddle Baby Doll is done!

If you stuffed the doll with wool or used wool or mohair yarn, do not wash it in the washing machine.  The wool will felt and turn into a big ugly doll mess.  Just spot clean the doll as needed.

Why We Love the Primo Water Dispenser with Pet Station

5 Things Every Plus Size Mama Needs for...

DockATot – a New Baby Must Have!

How to Make a Marshmallow PEEPS Christmas Centerpiece

This is adorable!,,thank you for sharing I’m going to make some for my grandbaby, she will love them so much