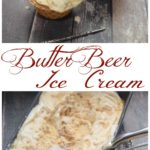 When my husband and I were dating, we did Harry Potter cosplay as Tonks and Lupin.  I had purple and pink hair, and he handed out chocolates.  We even won costume contests! It was a lot of fun.  Now that the new movie is coming later this year, you can bet we’ll be at it again.

To celebrate let’s have some ice cream — some Butter Beer Ice Cream! This is an easy recipe, and the best part is…it’s no churn style!  It’s buttery with a touch of caramel.  You and the kids will love a big ol’ bowl while you have a Harry Potter movie watching party. Or maybe you’re like me and just want to snuggle on the couch with a Harry Potter book and a bowl for yourself?

I started out with butterscotch ice cream topping, cream soda, brown sugar, and butter! You can’t have Butter Beer without butter.  I combine all the ingredients and boil them down til they are thickened into a syrup. It took me about 10 minutes to get there.  While it’s cooking, the butter turns into that nutty delicious brown butter that just adds to the flavor. Then, I freeze it for about 30 minutes.

When the butter beer syrup is cooled and the edges are turning a bit thick, I add spoonfuls on top of the ice cream base.  Then, I swirl them in gently so they won’t be completely mixed in.  Let the ice cream freeze overnight.  The next day, you’ll have buttery ice cream bliss that will remind you of a hot cup of butter beer.

Looking for more Harry Potter inspired treats and eats? Check these out:

Skip the lines with Google Express!

No Bake Pie Recipes for an Easy Thanksgiving

How big of a pan do you need to put this in?

I use a loaf pan.