Does anyone ever have enough hot pads or pot holders or trivets for the kitchen? I know I never do.  I’m always having to fold up kitchen towels to put hot dishes on the table or the counter.

I came across this Pin to make a ball of continuous t shirt yarn and this Pin to make a woven trivet.  I decided I was going to combine both ideas and do it as cheaply as possible. (Look at my vintage Pyrex asparagus dish! It was 50% off, I think I got it for a $1.50 or less. I love vintage Corning ware and Pyrex.  My cupboards are stocked with it.)

In the Pinterest tutorial for the trivet, she used stretcher frame.  I’m not even sure what that is. I decided to go buy an ugly but sturdy wooden picture frame.  I paid about a $1.

I bought a pack of nails at the Dollar Tree, and hammered them in every 3/4 inch or so.  I eyeballed it.

I did this on both the top and bottom of the frame.  Now my frame was ready.

On to the t-shirt yarn. I regularly use t shirts in my crafting, so I have one of those XL Ziplock bags stuffed full of old t shirts from home and 50 cent tshirts from thriftshopping.

I choose two t shirts to use — a brick red one and a dark heather gray.  Our kitchen is  white and black with some red thrown in.  I thought they’d go well together.

First, only use t shirts that have no side seams.  Surprisingly, I had these in my stash without side seams — it’s not something I even considered when I bought them.  To make a good amount of t shirt yarn, get as large of a t shirt as you can find, preferably solid with nothing printed on it.

I folded the t shirt in half lengthwise and then cut a line across the width just under the arms and just above the hem.  I wanted to keep as much of the t shirt as I could.

Once it was cut, I positioned the t shirt so that one side seam was about 2 inches below the other, as seen in the picture below.

Cut 1 inch strips, but DO NOT CUT ALL THE WAY THROUGH.  At the top, leave about 3/4 or 1/2 of an inch.  This is very easy to do if you have a plastic quilter’s ruler and a rotary cutter.
One inch strips might seem really wide, but the stretchiness of knit makes them turn almost tubular into half or less of the 1 inch width.

Here is what it looks like at the top where you didn’t cut all the way through.

This is the part I did not understand until I did it.  Take your scissors, and cut diagonal to the beginning of the next cut.  I tried to demonstrate in the picture.  It’s almost like a mobius strip.  The first one, will cut off diagonally and make the end.  The next diagonal cuts will create the lengths of yarn.  Be very careful, I did end up messing myself up and cut a loop and cut my yarn a wee bit shorter than it could have been.

If you just cut straight up and down, it will just create loops of t shirt material.  By cutting diagonally to the next row each time, it creates the continuous strips of t shirt yarn.

Once you’ve cut the t shirt into the continuous long piece, then wind into a ball, and you have t shirt yarn.Once you have yarn, you can crochet or knit whatever you want. I found this great rug tutorial, I think I might try next.

Now let’s get to making those trivets.First, find a scrap of cardboard and make yourself a shuttle.  I cut mine to be about 4-5 inches long and cut notches to wind some of the yarn onto it.  I also cut a little slit on one end to hold the end of the yarn.  Wind some of the yarn onto it and cut it from the ball.  I was able to wind enough to do half the trivet.  You don’t want the shuttle too bulky, or it will be difficult to weave.

Now take a ball of t shirt yarn and the frame and tie off the t shirt yarn on the very first nail.  Then, wind your yarn up and down between the nails like below.  Then when you finish on the other side, tie another knot at that nail.

Tie the loose end of yarn from your shuttle to the piece of yarn on the first nail.  Then, begin weaving in and out.

When you are completely finished, pull it off the top nails gently.  And, then the bottom nails.

At this point, you’ll twist and stretch it to get it to the right shape you want.  I tied all the knots smaller and cut off excess as well.

I made one of these in about 30 minutes times.  I did it sitting at the table while my youngest played in the living room next to me, and I was listening to the This American Life app on my phone and drinking Ace Pear Cider as I was weaving.  So relaxing…
That app is so worth the money! I think it’s around $2.99.  You can listen to every single This American Life episode ever in the app included with that price.  Otherwise, you end up buying individual episodes on iTunes, unless you get them the week they come out. 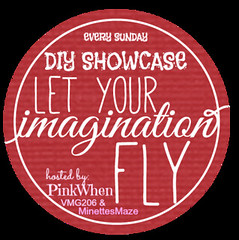 How to make Halloween Spider Slime with Glue

I went on a mission trip a couple of years ago to teach sewing to a group of Roma gypsy women in Romania. I left behind a whole file of t-shirt yarn projects. This would be a good one to add.

I love this idea, you made it sound so do-able as well. Thanks for such a great tutorial.

Just seen you over at the Lamberts Lately Create it Thursday Linky. Hope you can return the favour soon and visit my blog.

Awesome! Now I have a use for old t-shirts. I’m looking forward to learning more from you!

Would love for you to share this at my link party where we pin all those who join to our party board
http://myfashionforwardblog.com/all-things-pretty-11/

Amazing work! Love it so much!Thanks so much for sharing the great tutorial! Would love to have you visit me sometime.
Have a fabulous weekend!
Hugs from Portugal,

What an excellent way to use up old t-shirts!
I would love if you came and linked this project to my clothes upcycling project page. It has a long term linky, so your project would stay there for more than just the week of a usual linky. We have over 400 projects linked up now – some fantastic ideas.
Do come and take a look!
http://jembellish.blogspot.com/p/clothes-upcycling-projects.html

Oh and Thanks for linking to a Round Tuit!
Hope you have a fabulous week!
Jill @ Creating my way to Success
http://www.jembellish.blogspot.com/

Wow, I LOVE this!!!! You are so creative. I love how you used the picture frame and made your own loom (or whatever it’s called). What a great idea. I need to try this for all our old tee shirts!

Thanks so much for linking up to the “Making Your Home Sing Monday” linky party today! 😉

It looks like the ones that I tried to make when I was a kid with the loops that go on the plastic loom. I never learned how to get the thing off of it though 🙂 This looks super fun. I found you through Frugal food Mama!!

Very creative! I love this idea. Not only are you recycling but you are making something useful and cute! This fun project will be featured on Great Idea Thursday’s! Krista @ A Handful of Everything

Love this! Thank you for sharing this on my What Are You Doing? Blog Hop! I hope to see you again this week!

Love this idea! But I have left over t-shirting material 150metres wide. Can I still use this technique? I know everyone uses seamless t-shirts. Hope you can help? 🙂