It’s time again to share some of my favorite books I’ve recently read. These are a great group of novels for lazy summer reading. 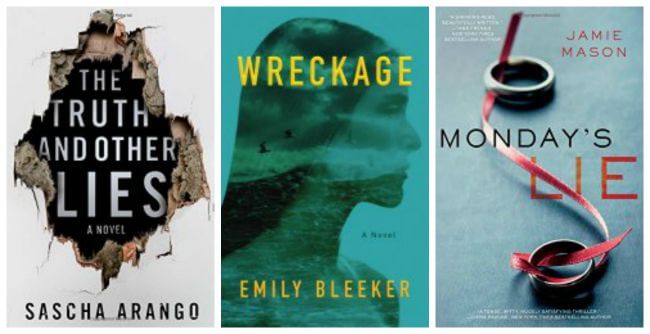 Are you addicted to reading like me? I swear it’s like breathing. If I can’t sit down for a few minutes a day and whisk myself away in a story, I feel a little anxious. Reading is one of stress relievers.

I hope you enjoy them as much as I did.  They are all great stories I could not put down.

The Truth and Other Lies: A Novel

This was an interesting tale. The premise had me right from the get go. Henry Hayden is a world famous author, except he’s never written a word. His wife is the real author who writes all his novels. And, then one day, she’s murdered.

Right from the beginning, you realize Henry is not really who he says he is. He puts on this front of being an every man nice guy, but you soon see what a manipulator he is.

I got the feeling he was leaning toward psychopathy from early on in the novel. Though, he seems to just twist in the wind, very methodically and calmly figuring out on the fly how to get out of the situations he in from the huge mistake he makes early on in the book.

There was a subplot thrown in with a man from his childhood who was following him and figuring out with proof that Henry wasn’t who he says he was. But, it seems to have just fallen by the wayside. His mysterious life before he met his wife wasn’t really fleshed out or divulged. You never really learn what has turned him into this quiet monster.

The entire novel builds in a slow, delicious climax and you question what will this man do to fix everything. But, in the end, it’s summed up in just a page or two which I found unsatisfying. What happens to him at the end seems just like the author was ready to end the book, not a real ending to a great story.

This is the story of Lillian and Dave. Lillian’s mother-in-law takes her on a once-in-a-lifetime vacation to Fiji when she wins a yogurt company’s contest. During the second week, on their way to a private resort, their airplane crashes. On the plane, she meets Dave, the PR guy for the yogurt company.

Over the course of an exclusive news interview, the story goes between Lillian and Dave as they tell the story of what happened the 2 1/2 years they were stuck on a desert island.

As the story unfolds, you know they’re lying, but you don’t know about what. It’s only through the back and forth chapters that you begin to realize what has happened. There is a switch off of chapters not only between Dave and Lillian but also between present day and their time on the island.

I will admit I did figure out who Paul was before anything but his name was mentioned, so it’s a little predictable, but it’s also a great story about surviving something horrible and getting to the other side.

This is the story of Dee, raised by a mom who was also a spy. She never really knew what her mother did, but there was one point in her life as a young teen when those worlds collided, and her mother was whisked away for 7 months. She never knew what happened or where she went, and it drove her nuts and scared her at the same time. All she wanted was a normal vanilla life, and she got her wish until her husband decided to try to kill her.

Her mother taught both her and her brother spy tricks as games to remember people or notice something off, etc. This was pretty interesting. However, she just keeps rehashing that time in her life over and over again.

Now current time, her husband is up to something, and she knows it’s not good. Her mother was a good teacher, so she couldn’t help but notice all the strange things happening around her. She thinks he might even be trying to kill her. Between the trip to the place where she thinks she’s going to get some answers, you learn more and more about her childhood.

This story is so convoluted. It goes back and forth, past and present, both as a child and an adult. You have to really pay attention. It took me a good 50% of the book to really start to get into the story, but once I did, I could not put it down.

The last 15% of the book is where the climax hits and the action occurs. But, it really seemed written for a script. I had to read and reread what was going on to even understand all the action.

I usually love stories that switch between past and present, but this one just seemed to be hard to decipher, plus it was almost too descriptive.

It was a good story that kept me wanting to come back to see what the heck was wrong with her husband.

Book Review: I’ll Be You by Janelle Brown

These sound like great reads! My kind of reads. I will pin in my Book Love board.

Great books Ill definitely look into the ones I haven’t read!! thanks for sharing!

Ooo these look really good! I especially want to read Monday’s Lies! Thanks for the suggestions!

LOVE this! I’m a reading addict, too, and since I haven’t heard of any of these books, I’m absolutely adding them to my “to read soon” list. Thanks for the recommendations.

I thought I was going to have so much more time to read during the summer but apparently not. However these books seem really good reads.