Our Trip to Moody Gardens

I was given tickets from Moody Gardens to facilitate this review. All opinions are 100% mine.

This summer we spent a week in Galveston. We happened to arrive on the same day that Tropical Storm Bill did. It was incredibly windy and raining, and we thought our vacation was going to be ruined. However, the worst of the storm went around Galveston, and we ended up with a little bit of rain, mild temperatures, and very few lines! It was actually perfect. By the end of the trip, the sun was out again, and we had a great time.

We chose to go to Moody Garden our first day since the storm was still there, and it was raining off and on. Due to the weather, we were not able to check out the water park part of Moody Gardens, but we got to explore all the pyramids. 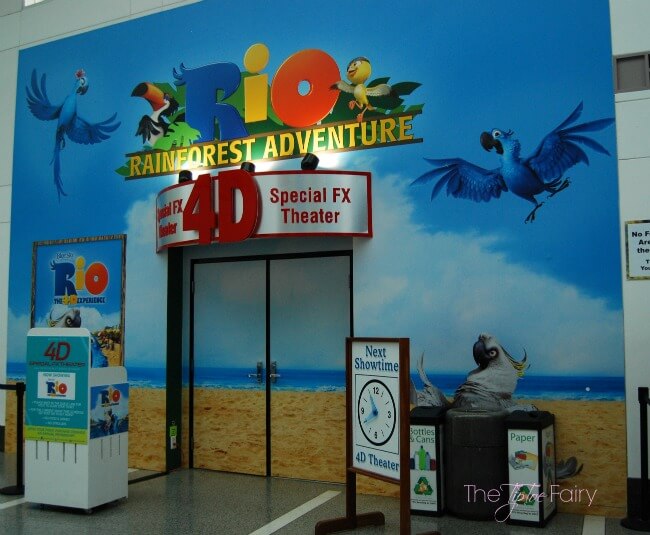 We had one day tickets, which meant we could go through each attraction one time. Our first attraction was right after the ticket booth, and it was a 4-D movie of Rio. It was my 5-yr olds first 3-D movie. She calls them “stick out movies.” Not only was it 3D, but it also had smells and the seats moved. It was about a 15-minute movie with clips put together of the two Rio movies about the blue macaw parrots. It was funny and light, and while there was a message of conservation and not taking animals out of the rainforest, it was not extreme or in your face. We all enjoyed it. 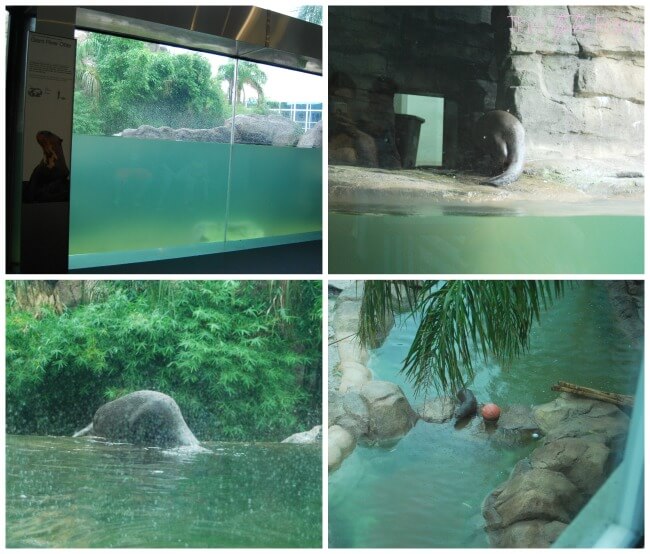 After the movie, we headed to the Rainforest Pyramid. I have to say it was my favorite. There was so much to see. The first stop was the Giant River Otter.  It was very relaxing to just watch how active it was.  It was out in the rain, then it would come and swim in the tank.  There were benches where you could just watch. 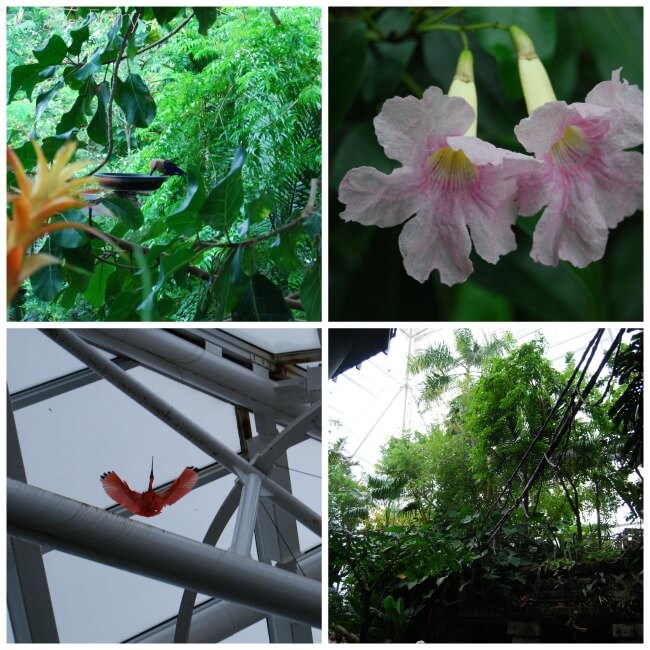 Then, we entered the rainforest.  It’s beautiful with all kinds of plants, trees, flowers, animals.  There’s even monkeys who are just out and about all over the place.  There’s beautiful birds flying all around.  It’s quite the experience. 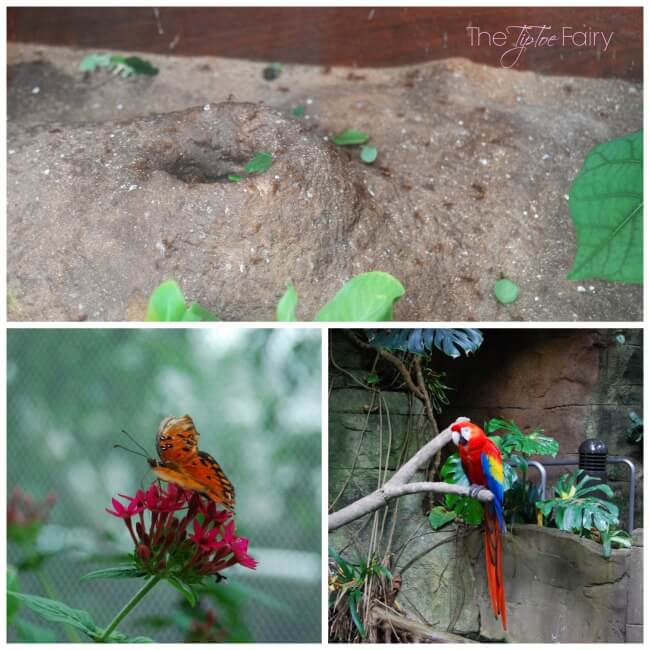 You enter up high in the rain forest and work your way down into the bottom where there are beautiful macaws.  I loved watching the leaf cutter ants work busily. There was even a butterfly room where you could get up close to the butterflies. They were all over the flowers. 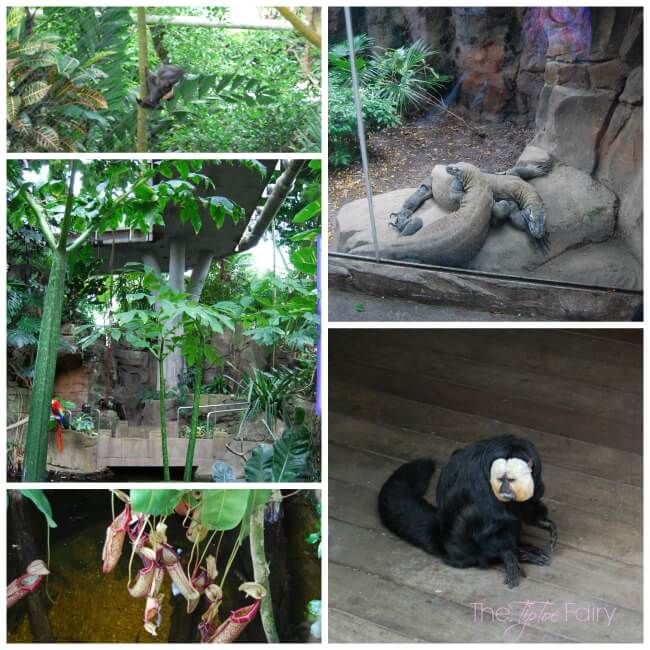 On the way to the bottom, I discovered pitcher plants, which look like little pitchers at the bottom of the picture above.  They are carnivorous plants!  There were also fruit bats flying around and komodo dragons.  At the bottom we found three corpse flowers, which are fascinating.  They only bloom once in their lifetime, and it smells so bad, it’s like a dead body. They were not in bloom when we were there. 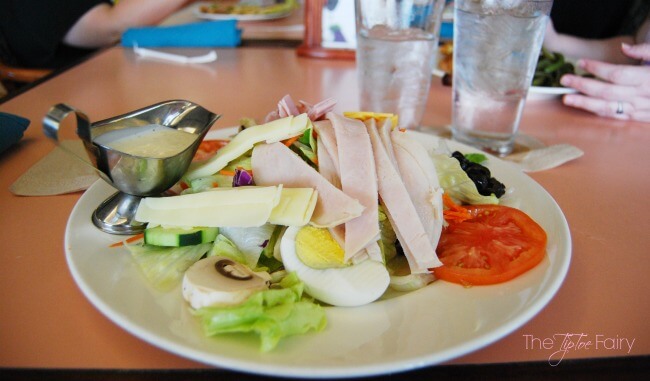 Next, we stopped for lunch at the Garden Restaurant.  They have menu service as well as a buffet.  It’s causal dining with typical American food and similar prices for the typical causal dining restaurants. The view is gorgeous of the bay. We all ordered off the menu. 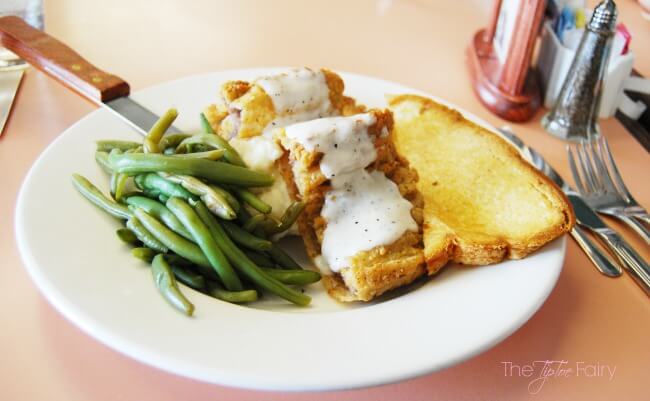 They have kids meals as well as adults. They also have a daily special, which that day was Chicken Fried Steak. It was very good. My youngest devoured her spaghetti and meatballs. 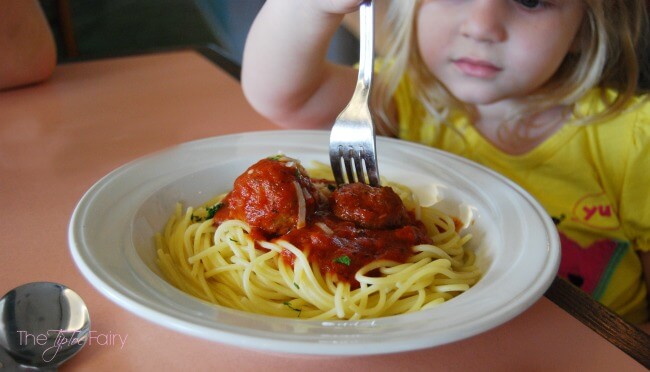 After lunch, we were on to the Aquarium pyramid.  My teenager fell in love with one of the seals.  the seal would tuck herself upside down on a rock in the viewing area.  She and my daughter just played and played.  We didn’t even see the entire Aquarium pyramid because Miss Em kept begging to check on “her seal.”

When we first walked in, there was a lovely employee with an open tank who showed us lots of different sea creatures from anemones to starfish. Then, we headed to the sharks. You could even get your picture taken in a shark cage. There were tons of penguins, and they were very active, swimming around. 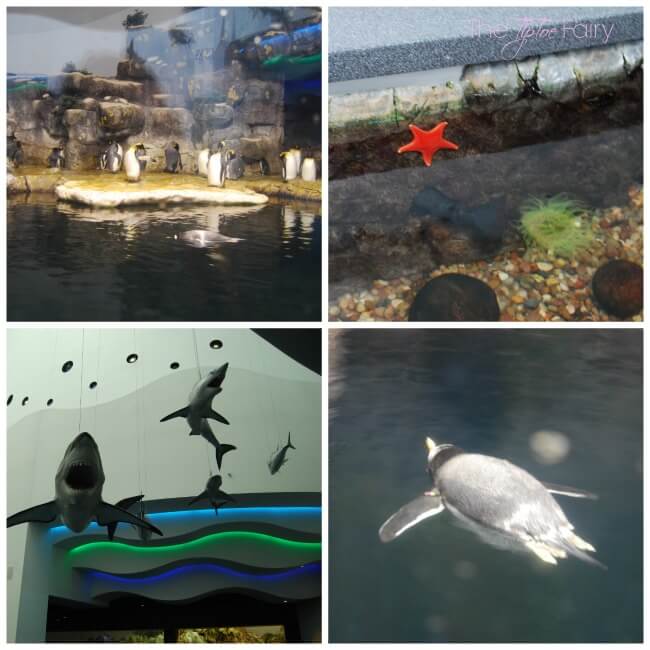 Since the aquarium was darkened, I don’t have a lot of photos from it. But it was well worth it.

Then, it was time to head to the Discovery pyramid. This was where the brand new SpongeBob SubPants 4D show was — and it was interactive! I didn’t quite know what that meant until we experienced it. But, there’s definitely audience participation. They get 3 kids to volunteer to push buttons to drive the sub. Patrick Star talks to some of the kids, who help him steer the submarine, and he’s definitely talking to them. He asks them their names, and he calls them by their names and talks to them. The kids get to decide between some choices he gives them for where we’re going to visit in Bikini Bottom. You even get a little wet, and there are interactive smells! We all agreed this was our favorite show. 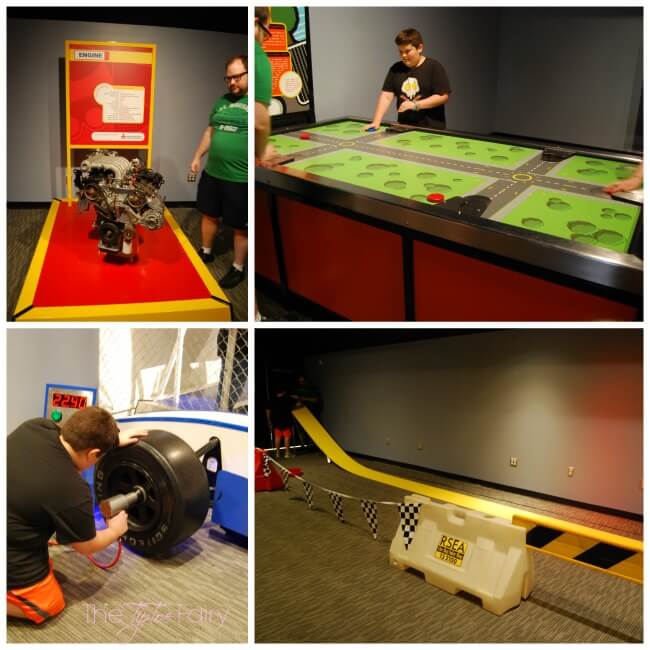 The discovery pyramid also has traveling exhibits. We got to experience SPEED: SCIENCE IN MOTION, which is there until January 2016. It’s all about Formula One racing and every thing was interactive and totally fun. There’s racing video games you can play as well as physics experiments, and even how fast can you change the tires. Nate and Mr. E had a ball in there. 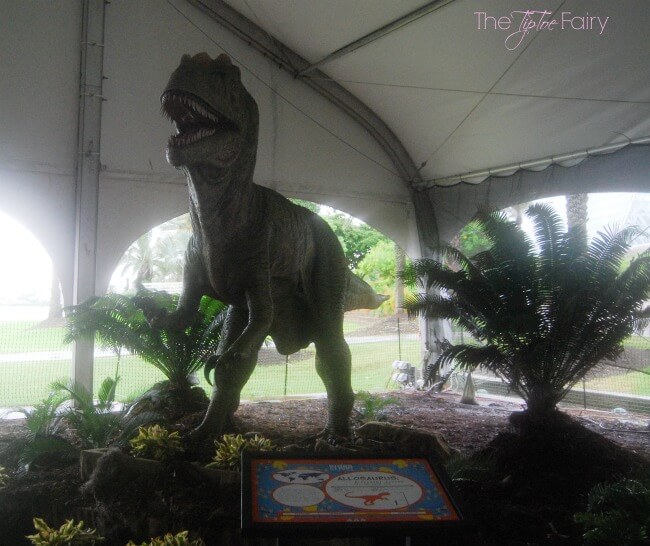 There is also a paddle boat and an outside exhibit of animatronic dinosaurs. We were able to visit the dinosaurs since it was under a very large tent. They were extremely realistic and scared the heck out of my 5 yr old. Unfortunately, the paddle boat had to stop running due to the weather.

After was almost dinner time, and we were exhausted. We didn’t even get to check out the water park or the rope course since the weather was bad, but that didn’t matter to us. There is so much to do at Moody Gardens. I think we all agreed Moody Gardens was our absolute favorite thing we did on this trip. It really was a lot of fun, and we can’t wait to go back!

Planning a visit soon? Don’t forget to grab your coupon for $2.00 OFF admission HERE!

Such a fun thing to do! I love visiting museums and zoos wit my kids. The idea of learning while having fun is the best! Loved your social media posts!
Xo,
Dee T @HauteFrugalista
HauteFrugalista.com

Oh, wow! This place looks like a great adventure and I so wish that we lived closer to Moody Gardens. I know that our kids have really enjoyed similar places, but Moody looks like such an immersive experience that I know they would love it. Such diverse flora and fauna, how could you not love it. If we are ever in that area, we will definitely stop there for a day.

There is a lot to see and do at Moody Gardens. I have never heard of it before, and I had no idea they do movies in 4d now!! What an amazing trip you took, so many great memories!

Sounds so much fun! I’m glad that the storm didn’t ruin your vacation. The moody gardens sounds like a great place to visit. There so much to do! I’m sure you had a fun learning experience.

It looks like you guys had a great time, it seems like there were so many things to do! Also how yummy does that friend chicken steak look?!?! Thanks for sharing this with us!

Whoa those carnivorous plants looked so interesting and I have never seen anything like that kind. Garden Restaurant’s food seemed fresh and appetizing with those vivid colors. I like the big meatballs on spaghetti.

I LOL at your daughter calling 3D movies “Stick out movies” I love it! The fact that it had smells and movement must of really brought the experience to life. I have to say that I agree the Rainforest experience seemed like the best of all the pyriamids although I’m sure my kids would enjoy all of them.

Now that looks like such an awesome place to visit! I love going to places like that. Great way to learn some things and yet have so much fun! Plus I love animals! Hahah I love anything with animals. The video of the seals is just cute! It looks like you all had a blast! Thank you for sharing! =D

All my children would enjoy this … both the toddler and the teens. My first stop would be to see the butterflies. My second stop would be for the starfish. I can’t wait to talk my husband into taking us.

Looks like a fun place to enjoy with the kids! we have places that are similar near us, and I love taking the kids to enjoy a day at a place like this.

This sounds like such a fun day out experience for the family. Those dinosaurs really did look very realistic, maybe it was better off that the weather didnt allow you to paddle boat, I would have been to afraid having just watched Jurassic Park too many times to count. (My son is addicted to dinosaurs).LOL