I attended a free screening of The Nut Job 2. All opinions are my own. 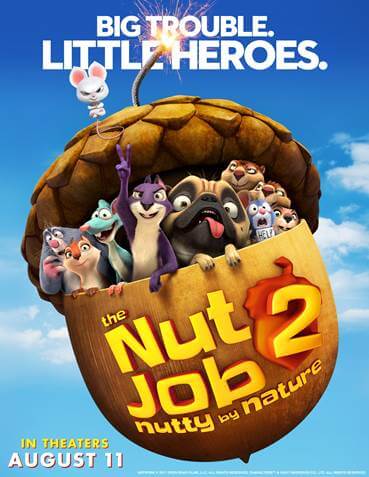 Recently I took my family to see the sequel to The Nut Job.  In the first movie, the squirrel plans a heist of the local nut store.  When the sequel opens up, the park animals have all taken over the now closed nut store and turned in into a raging party 24/7.

The store accidentally blows up, and the animals must go back to the park.  But, soon, they learn, the corrupt mayor of the town is ripping the park up and turning it into an unsafe amusement park.

My husband thought the movie’s artistry was wonderful. The lighting and the design of the storyboard shots he felt were amazing.  He always notices detail like this that I often forget.  However, we both agreed it could not make up for such a bad story line.

We did not really like this movie, and I don’t think many people watching it along with us did as well.  The animal designs are just strange to look at.  The jokes fell flat.  No one was laughing.  It felt like a very dark movie.  The movie opens up with the park animals all being gluttonous pigs like they’re attending some fraternity raging party in the now closed nut store.

We felt many scenes were rather disturbing to small children.  WARNING SPOILERS AHEAD

There was one very scene where a rat is basically shot off a building ledge, and it appears he dies.  The children in the movie theater were very upset.  A couple were even crying out and screaming during this part.  And that wasn’t the only time there was attempted murder of the park animals.  The mayor is bent on killing them.  In fact the exterminator comes to rid the park of the animals and says he’ll do it safely and humanely, but the mayor wants them dead.

Another scene is when the mayor is dropped from a hot air balloon into a deflating bounce house where the legions of white mice scurry in to get him for all the horrible things he done.  It even looks like they are going to devour him whole.

Another disturbing part of the movie is the mayor’s little daughter.  She is basically a psycho who abuses animals, and she has no redeeming qualities whatsoever.  She’s a total product of her father, the corrupt mayor.  In the final scenes, she has learned absolutely nothing about how to treat animals and just ends up beating the exterminator as she’s hauled off in a police car.

From what I’ve read the original writers had nothing to do with this movie, and it was cobbled together by six different studios.  It just isn’t worth it.

If you’re choosing a movie this weekend to see with the kids, steer clear of The Nut Job 2.