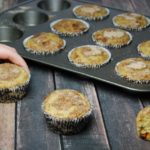 I decided to turn banana bread into something you absolutely couldn’t resist with a snickerdoodle twist! This time we’ve got Cinnamon Banana Doodle Muffins with a secret ingredient – peanut butter!

These muffins are heavenly. They’re light as air and melt in your mouth with just a hint of peanut butter. My taste testers had no idea there was peanut butter until I told them. You can taste it just a bit.

I used buttermilk along with two ripe bananas with a half cup of peanut butter as well as a cup of cinnamon chips. I’ve been saving these cinnamon chips since early this year. You can’t always find them in the stores.

I love cooking with buttermilk.  It adds a little sourness to recipes like muffins and pancakes that just makes them taste amazing. When I don’t have buttermilk on hand, I make it myself with regular milk and lemon juice.  Just add 1 tablespoon of lemon juice per half cup of milk.  Then, just let it curdle for a few minutes.  Works for me every time!

To top them off, I made a cinnamon-sugar mixture and sprinkled it on just before baking.

This is definitely one of my favorite muffins to bake.

How about banana and snickerdoodle put together for a fluffy muffin that will leave you craving more?

How My Teen Learned to Play Guitar at...

I absolutely love muffins. These sound like they’d be perfect with a cup of coffee.

Those look really good. Love the combination of cinnamon and banana

great combination . i want to try these on this coming weekend i hope my kids would love it thank you for sharing your idea very creative and the recipe too

Absolutely scrumptious! My kids would love these.

These looks delicious and I LOVE the name! A perfect treat!

Oh my goodness! These sound like the perfect muffins! I have to make these!