This shop has been compensated by Collective Bias, Inc. and its advertiser. All opinions are mine alone. #BigHero6Release #CollectiveBias 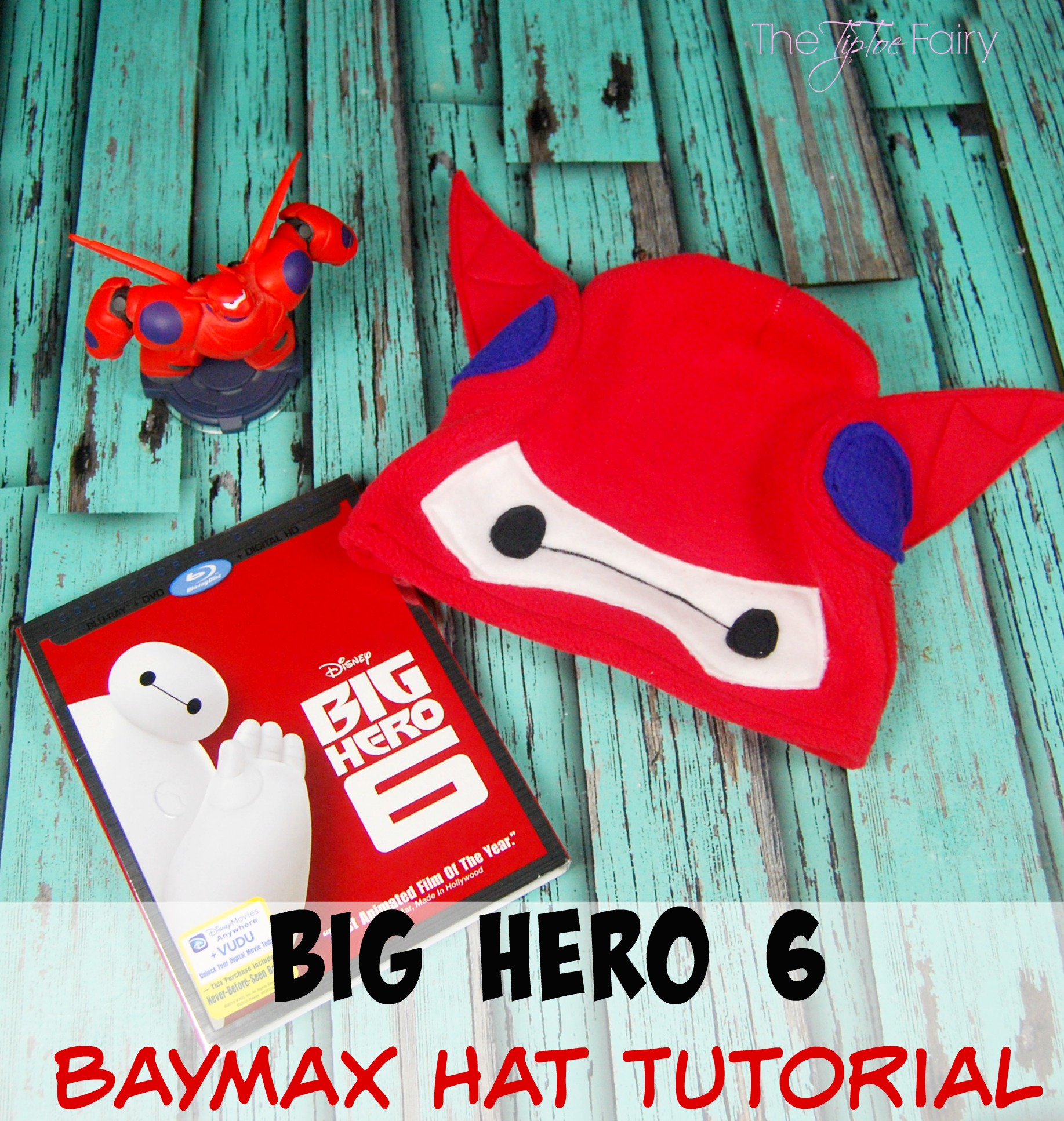 My kids love Big Hero 6, and they couldn’t wait for it to come out on DVD. My youngest two are really into pretend play superheroes and superhero style movies, so I knew they’d be thrilled with their own copy of the movie along with a Baymax hat. With the snow and ice we had all last week, it was a perfect time for a new fleece hat! 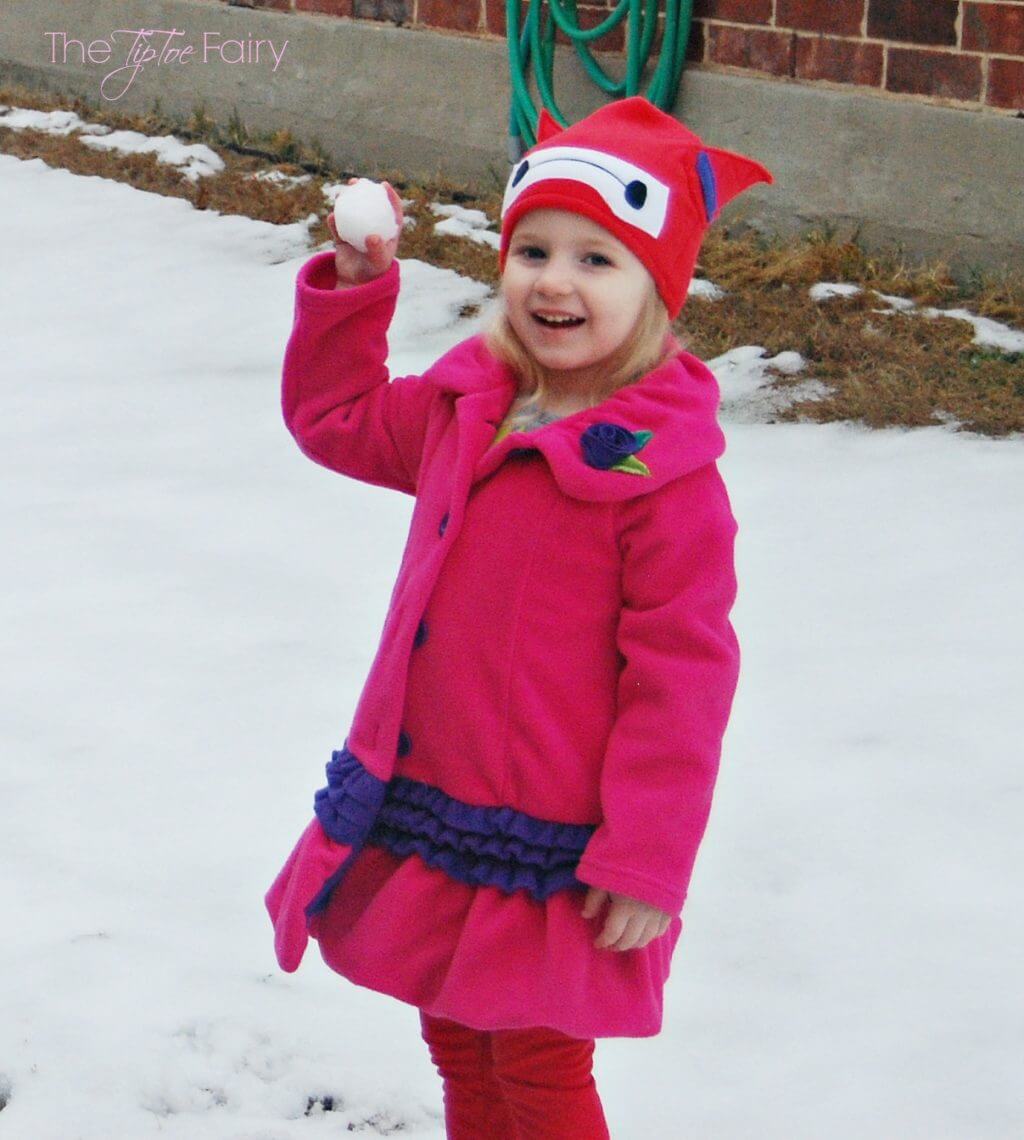 February 24th was our second snow day at home, and Big Hero 6 came out on DVD/Blu-Ray the same day. By the end of the day, most of the ice had melted off the streets, and I had some serious cabin fever.  We took a little trip to Walmart to get Big Hero 6 and the Baymax Disney Infinity character. 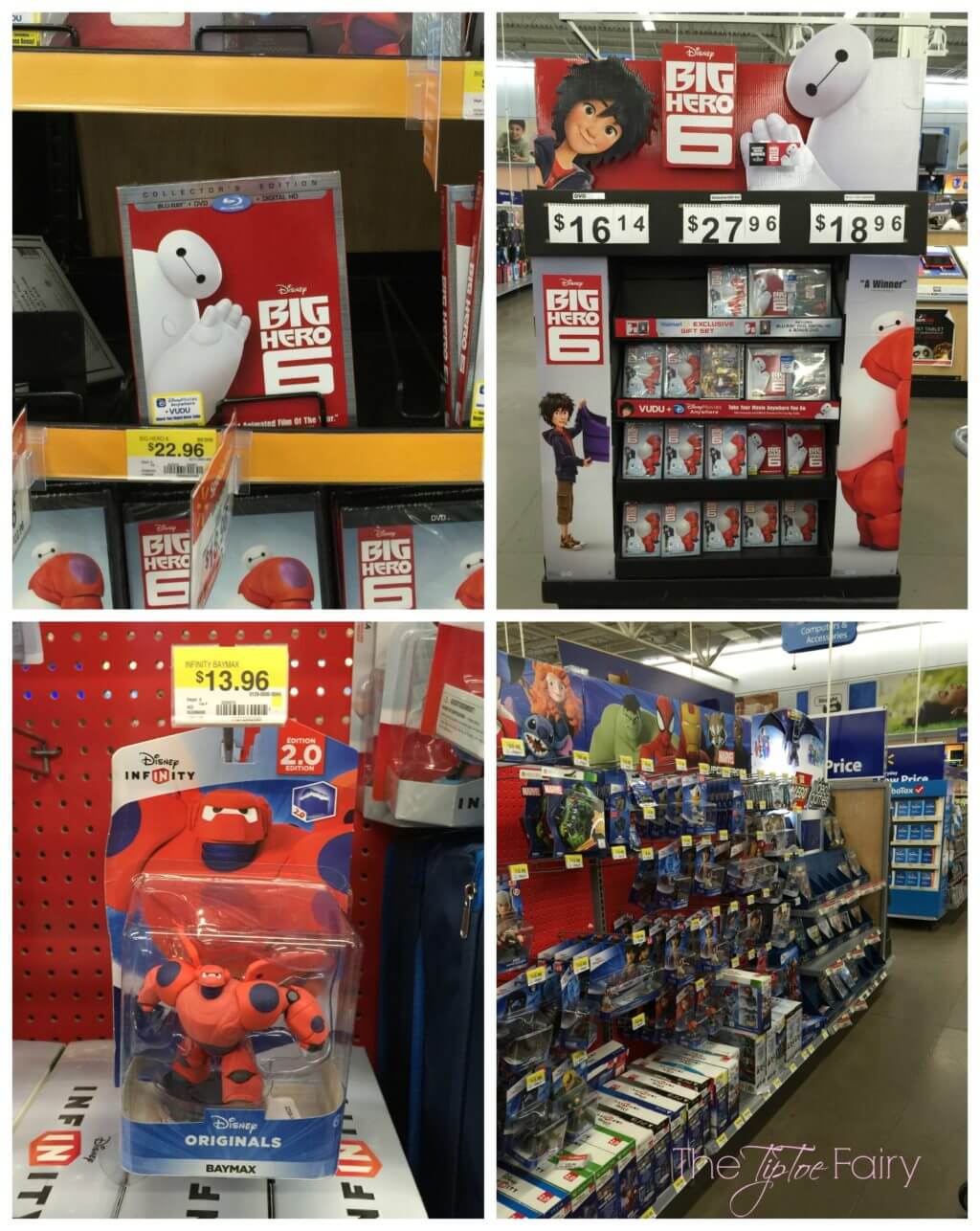 After they watched the movie for the millionth time this week, I surprised them this weekend with Baymax fleece hats. It was perfect timing because on Friday we had a ton of snow. 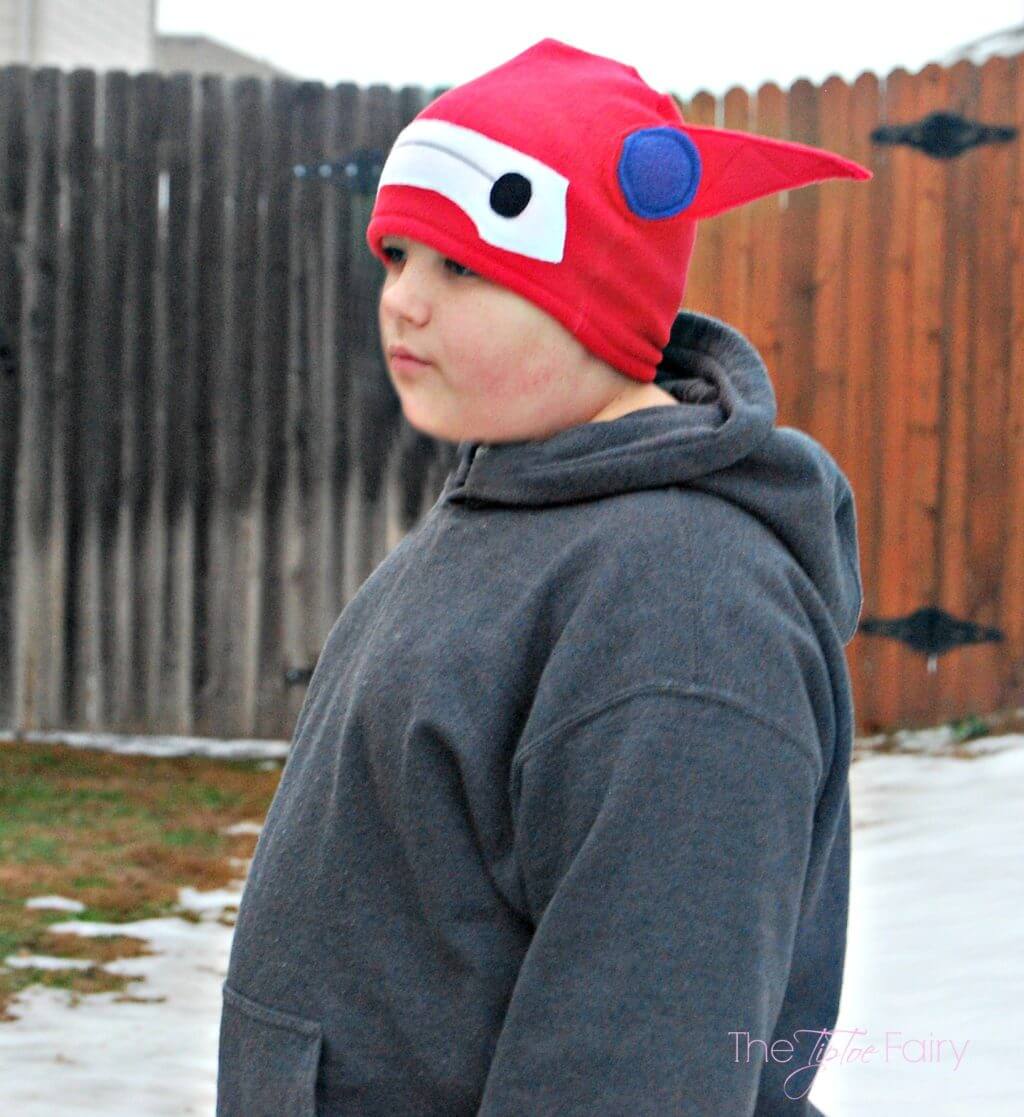 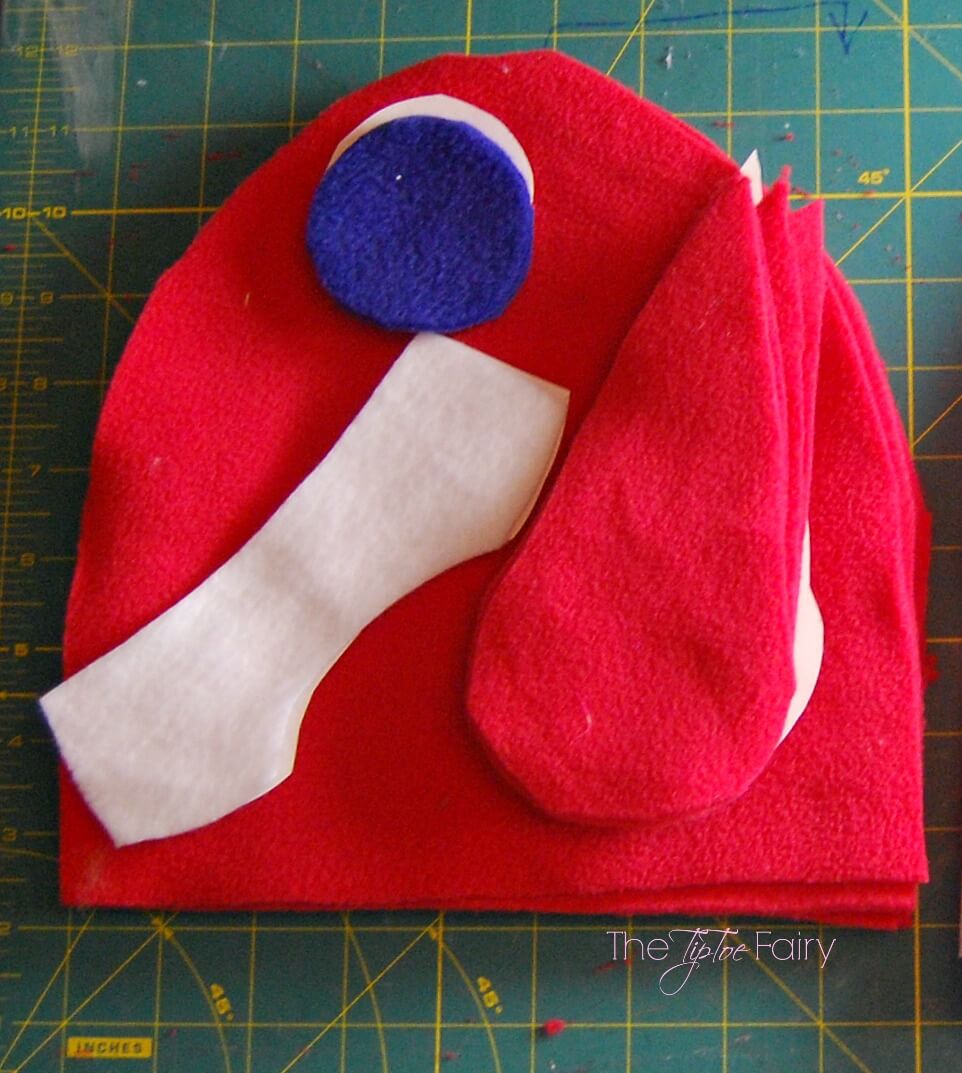 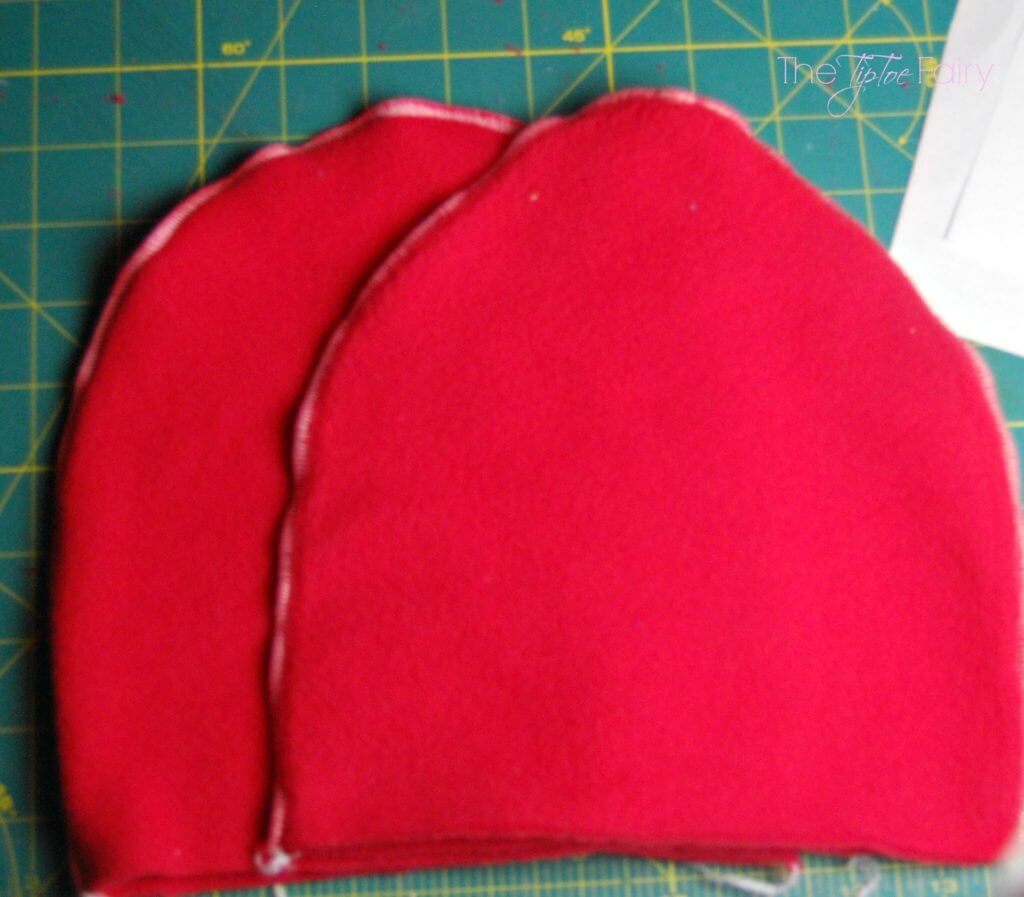 2. With RIGHT SIDES TOGETHER, sew the two hat pieces together. 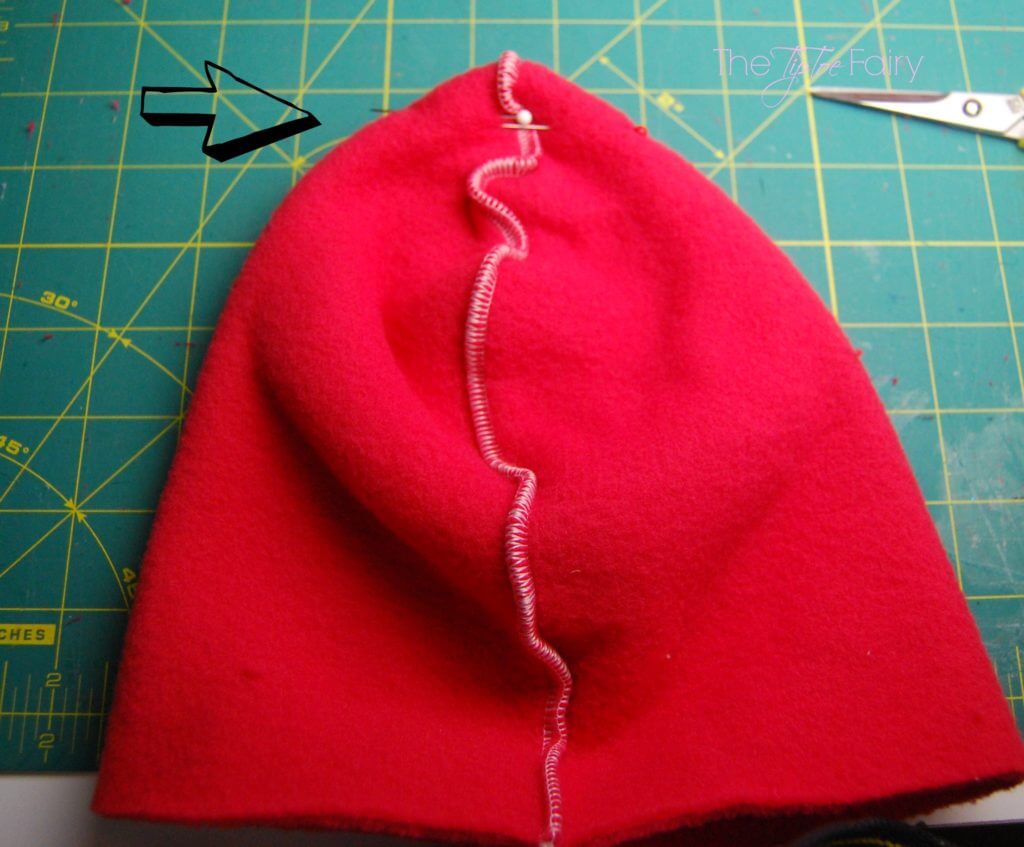 3. Fold the hat in half with the seams down the middle. Then, about 1-inch down from the top of the hat, pin it together, and sew a straight line across. Then cut the seam down to about 1/4 inch. This will give a better fit.

4. Next, position the white piece on the front of the hat with the bottom edge of the white piece about 1.5-2 inches above the raw edge. Then, add stabilizer behind it, and sew around it completely. 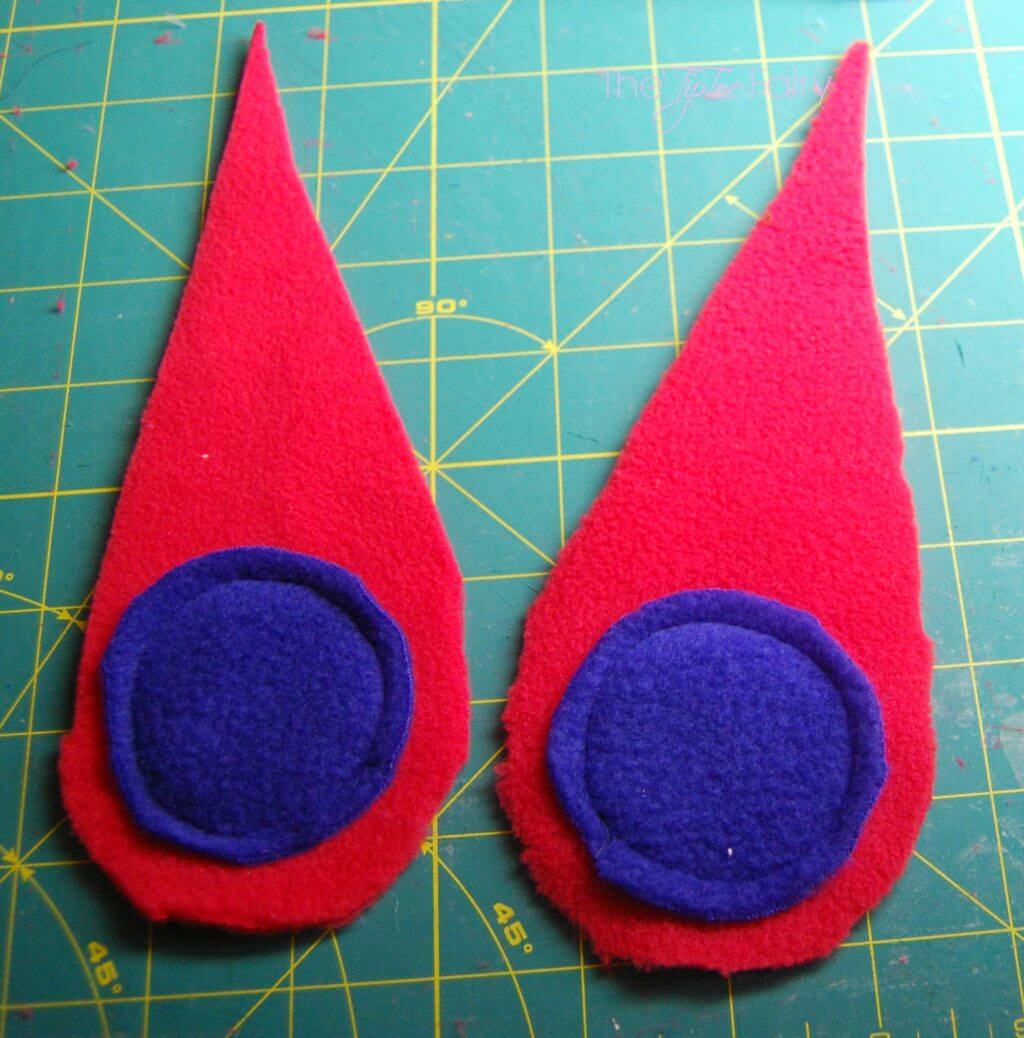 5. Take 2 of the ear wings and sew the purple circle around the circular area. 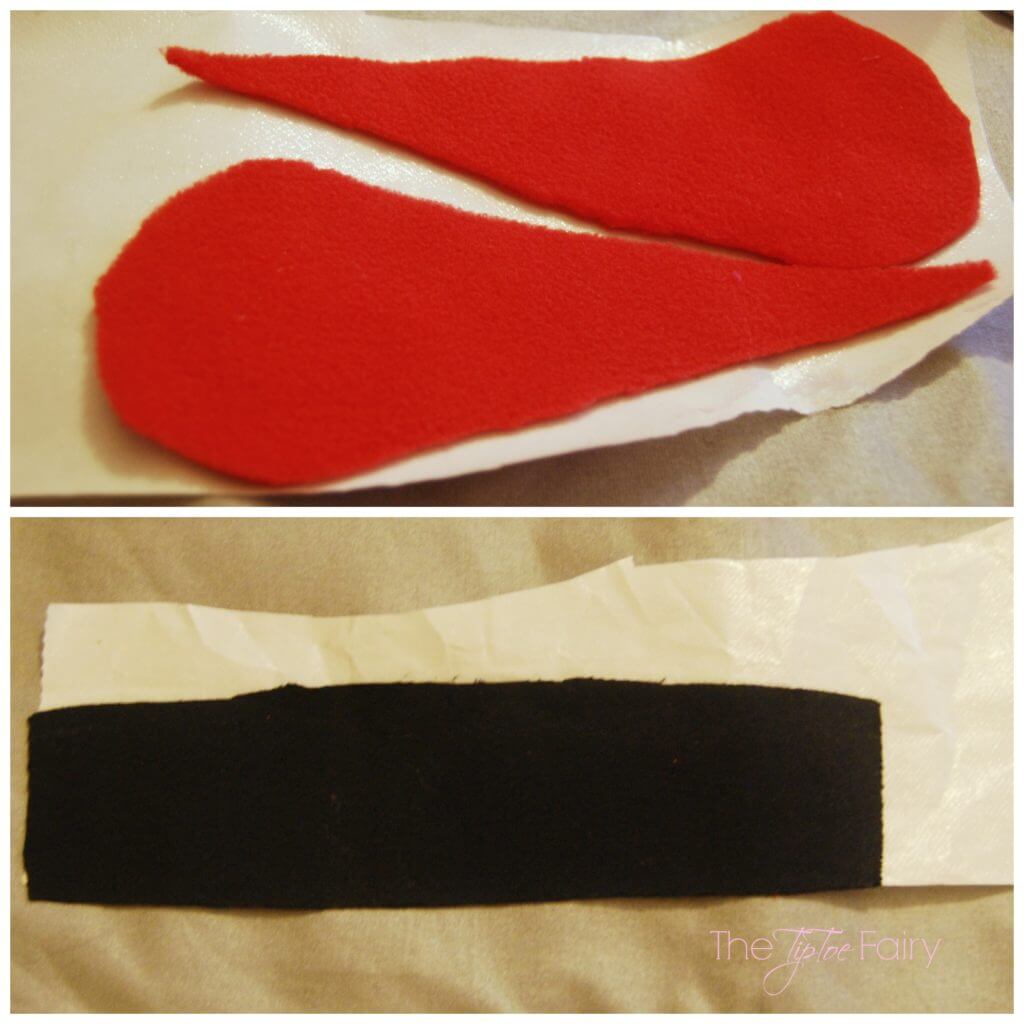 6. Take the other 2 ear wings and the scrap of black knit and fuse them to Heat n Bond Lite. Be careful because fleece can melt from the heat of the iron. 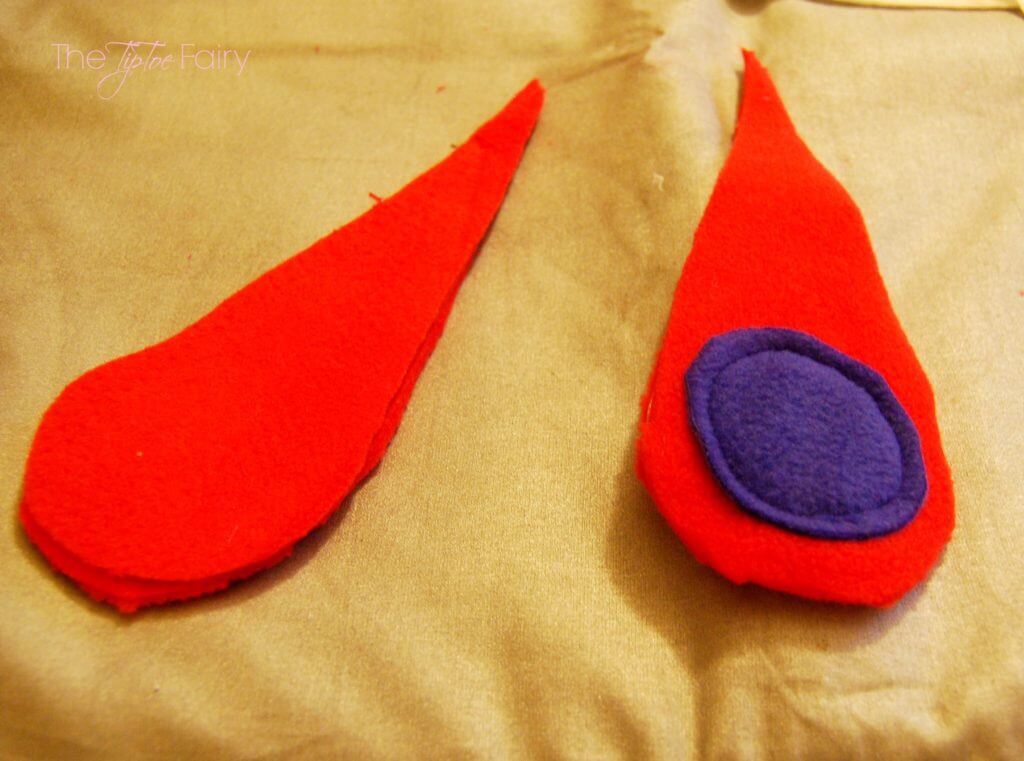 7. Take those ear wing pieces and fuse them to the wrong sides of the ear wings with the blue circles already attached. 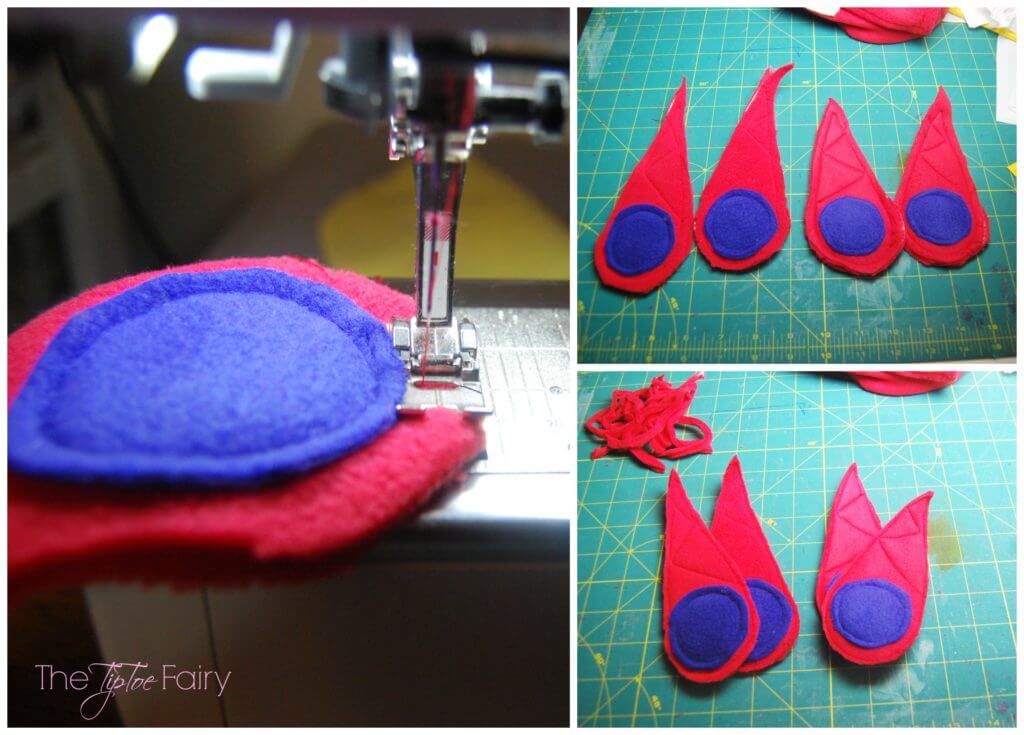 8. Now sew around the entire edge of each ear wing with a straight stitch. I added extra stitching in sort of a zigzag pattern as well. You do any kind of design or none at all. Then, trim down each ear wing close to the stitching. You might want to cut down the seam edge of the purple circles as well. 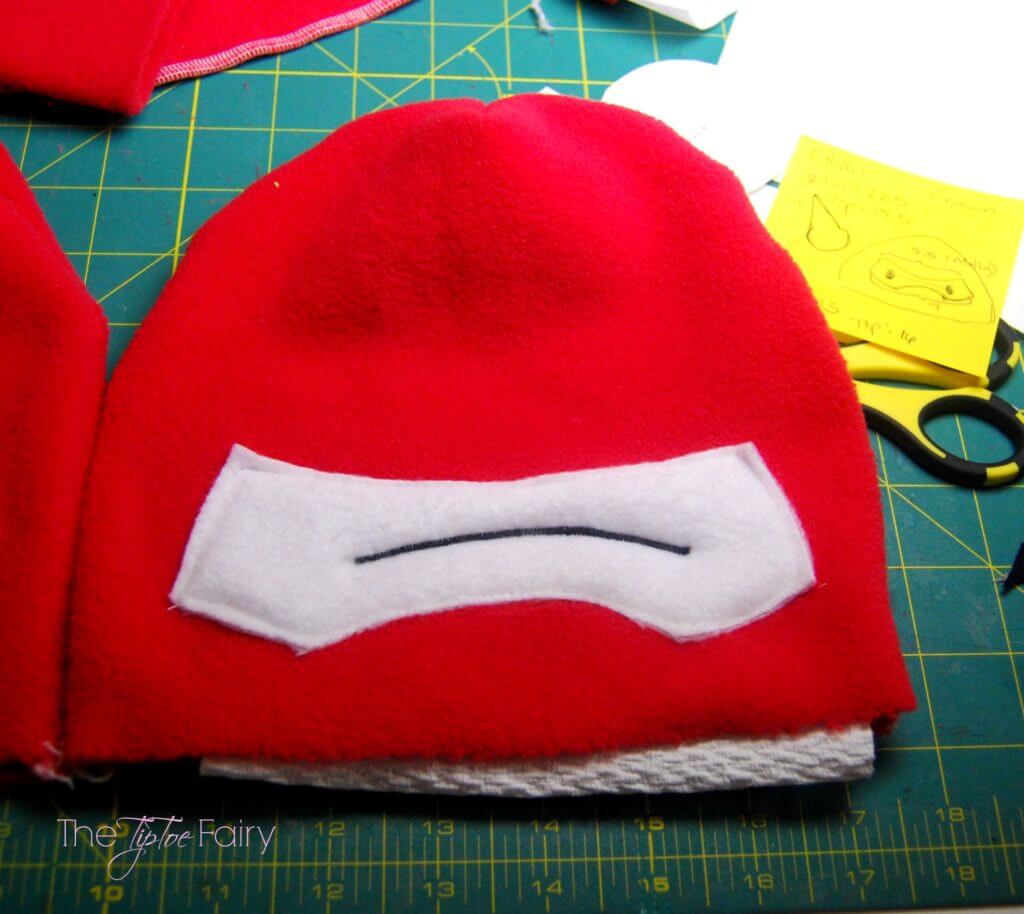 9. Next, lightly draw the eye line on the white piece. Then, with the stabilizer still behind it, use a zigzag stitch with black thread to applique it. I use the settings of 2 for width and 0.5 for length. You want a nice thin zigzag not a thick one. It will look nice and professional. 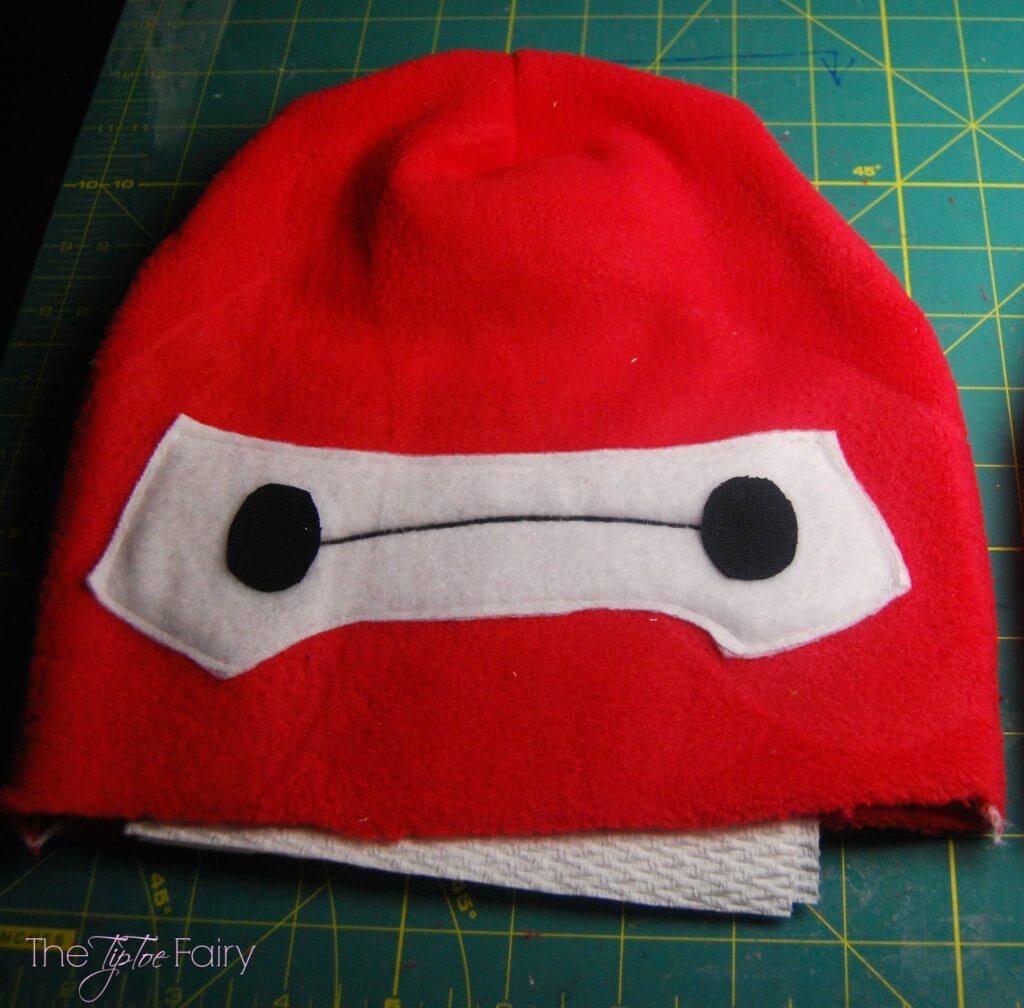 10. Next, cut out the eyes from the fused black knit and place them over the edge of each end of the eye line. Gently, use the iron and fuse them to the hat. 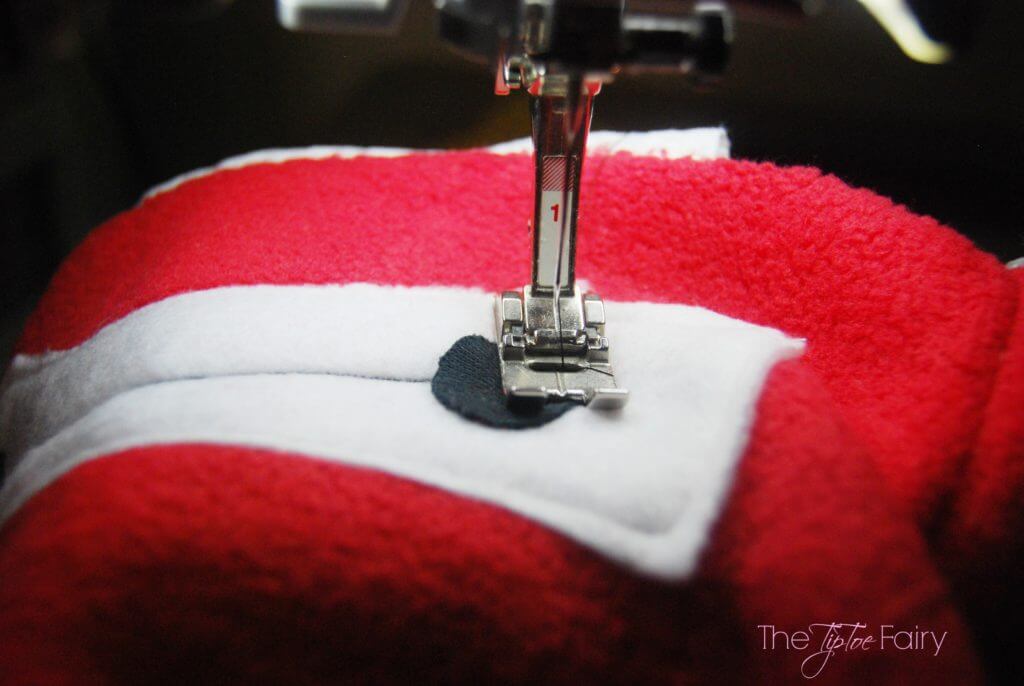 11. Using a straight stitch, sew around each eye. 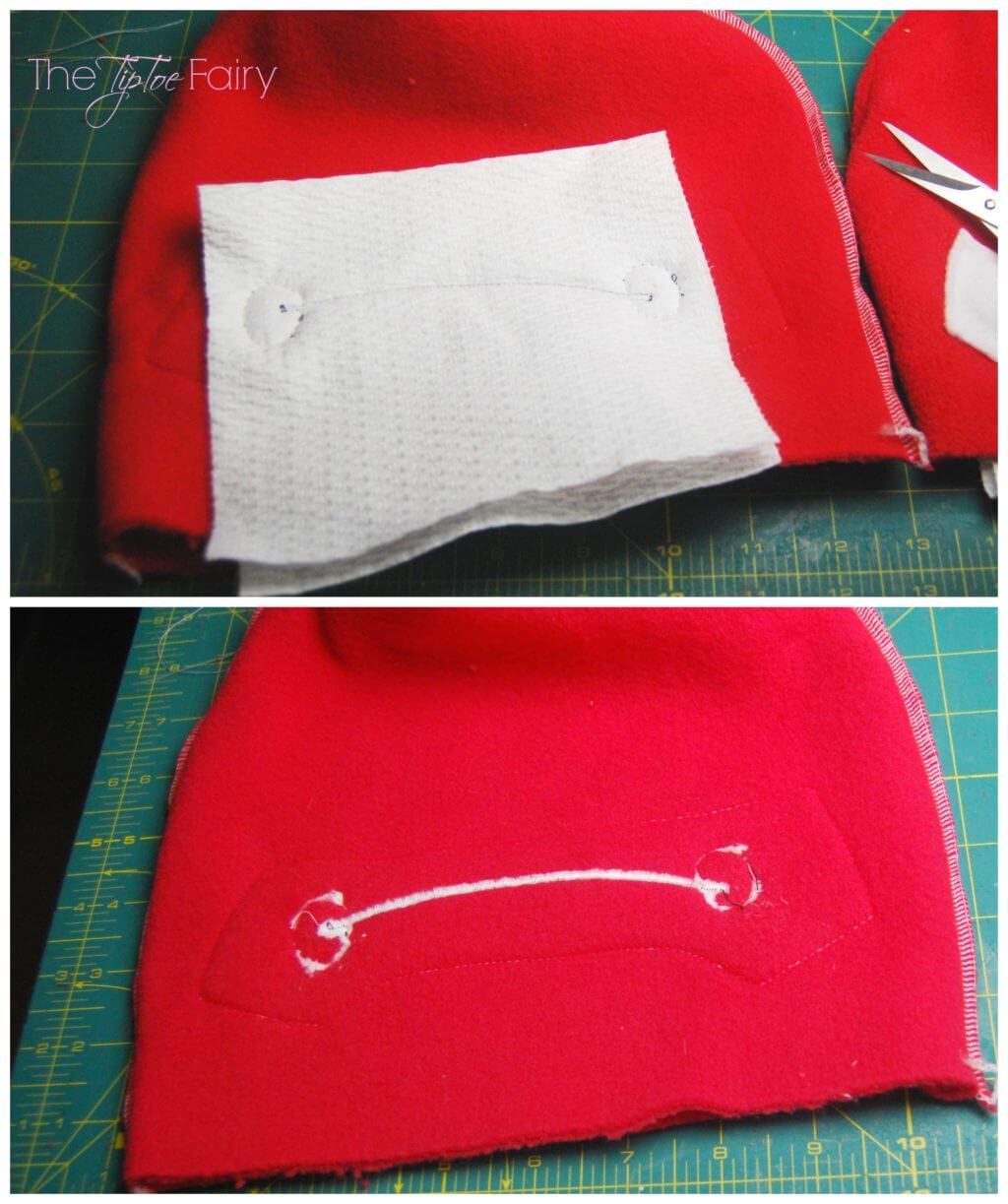 12. Flip the hat inside out and remove all the stabilizer. 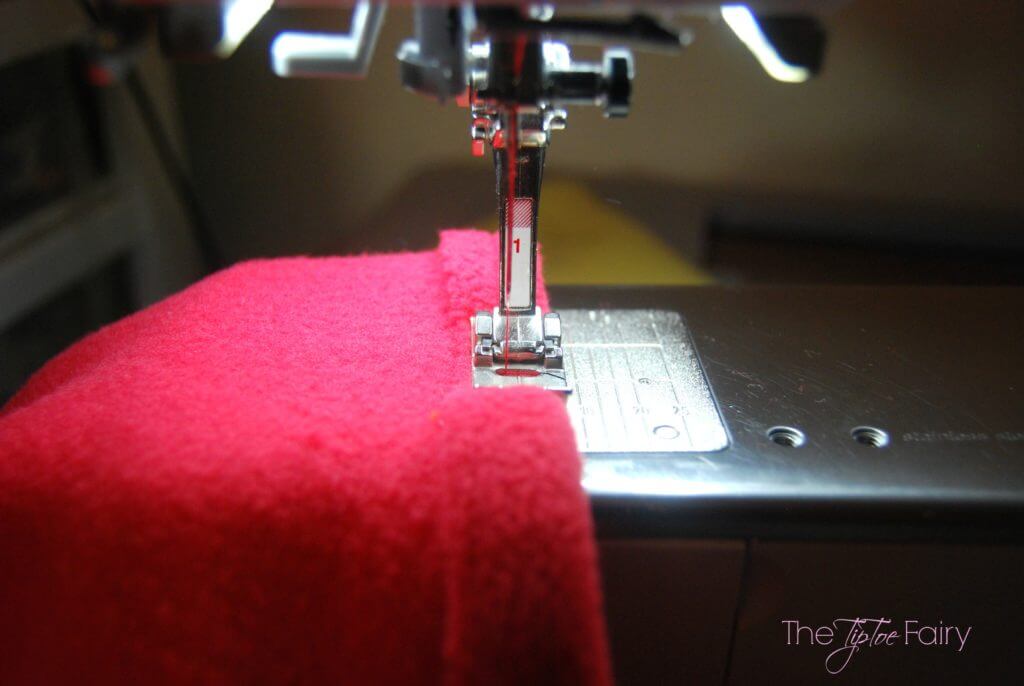 13. With the hat still inside out and fold the raw edge about 1/2 inch inward and sew the hem. Stretch it just slightly as you’re sewing, so the stitches won’t pop when you put it on. 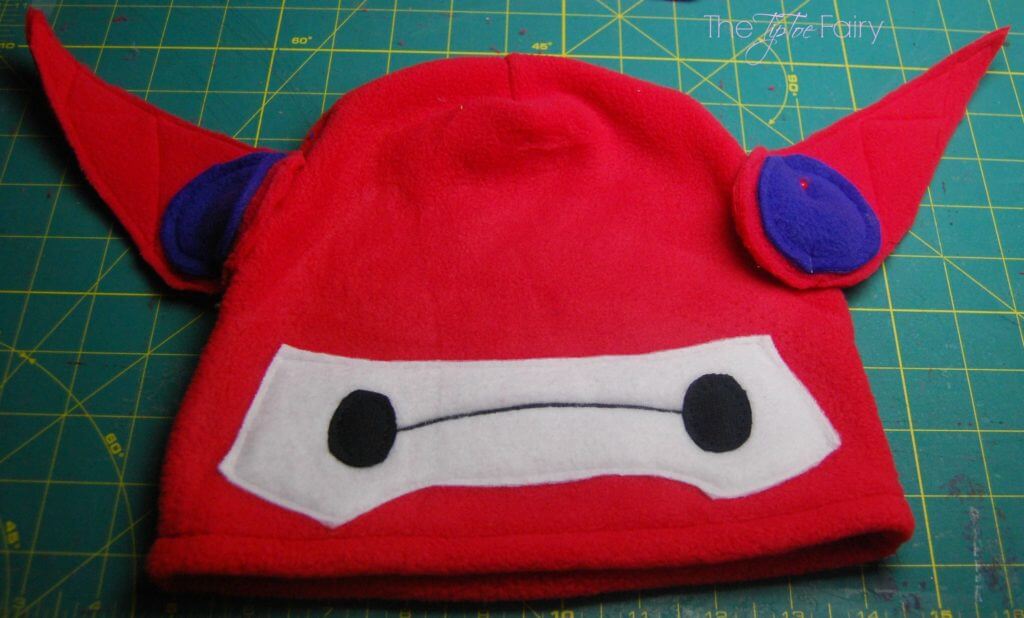 14. If you can, place the hat on and pin the ear wings on where you’d like them. Otherwise, just eyeball it.  Then, sew around the circular part of each ear wing to attach it to the hat. 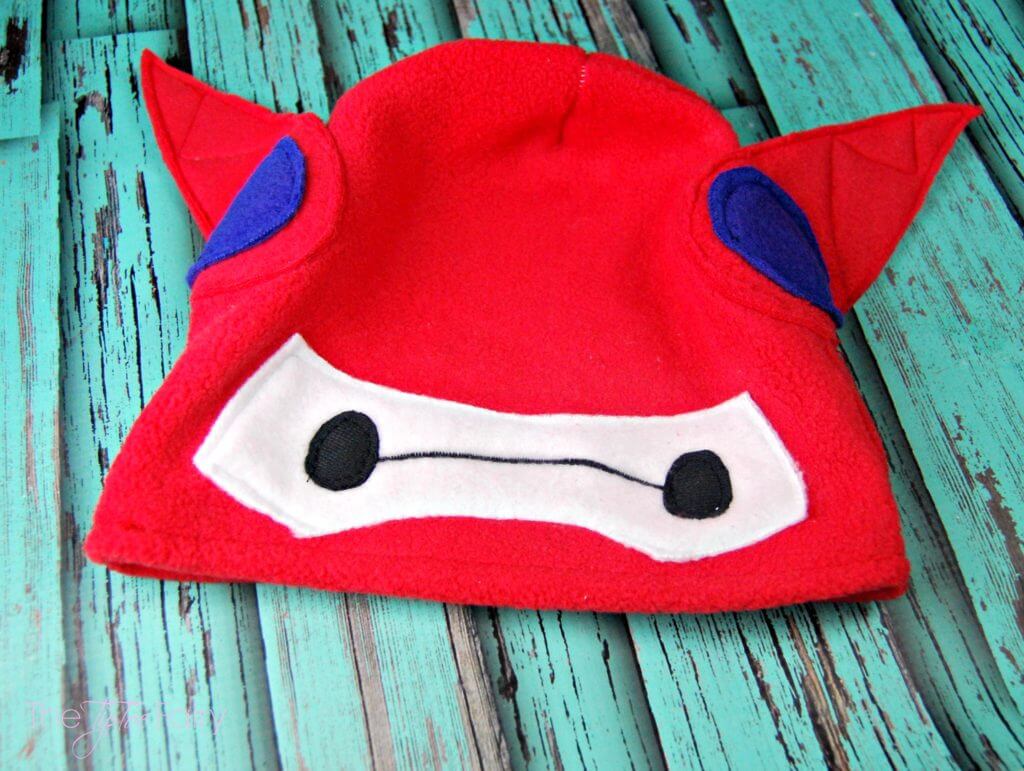 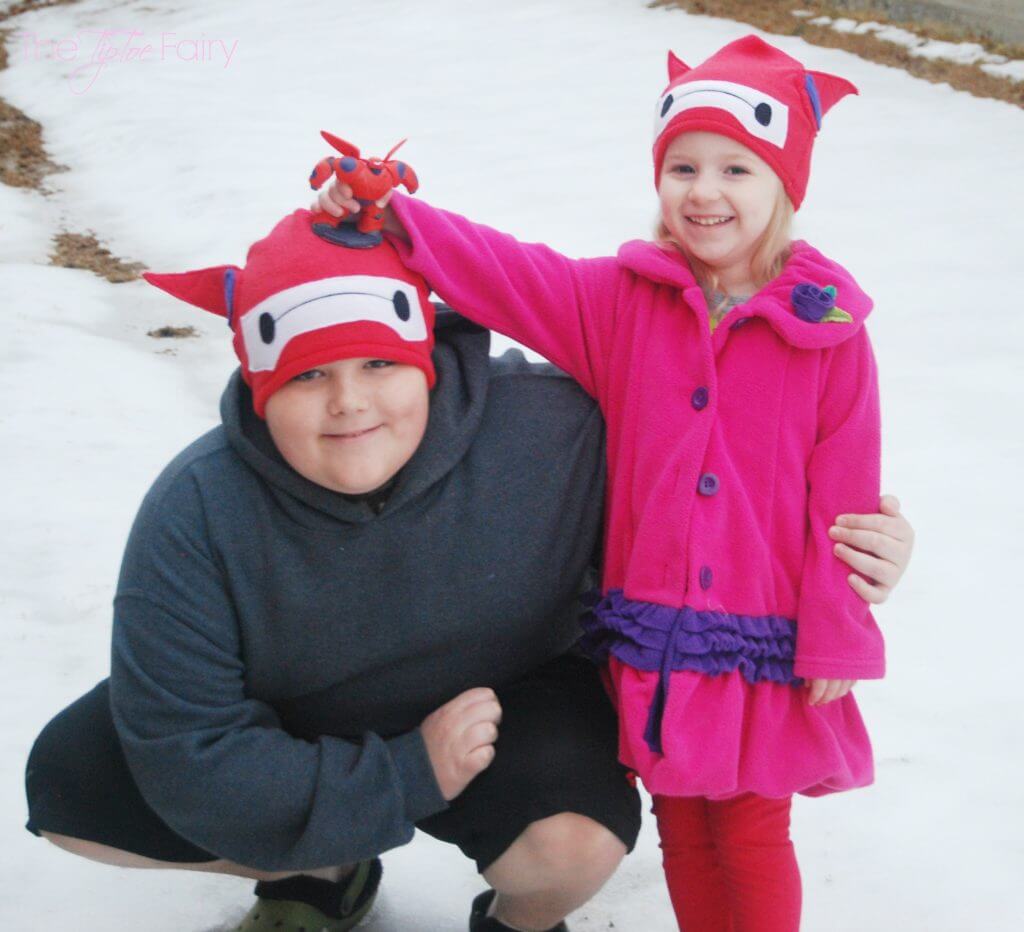 While supplies last your purchase of the Big Hero 6 Blu-Ray/DVD + Gift With Purchase Set includes a digital movie on Vudu! Simply scan your receipt using the Savings Catcher in the Walmart app. Then look for a message on your phone or email. Now you can watch Big Hero 6 on any device! 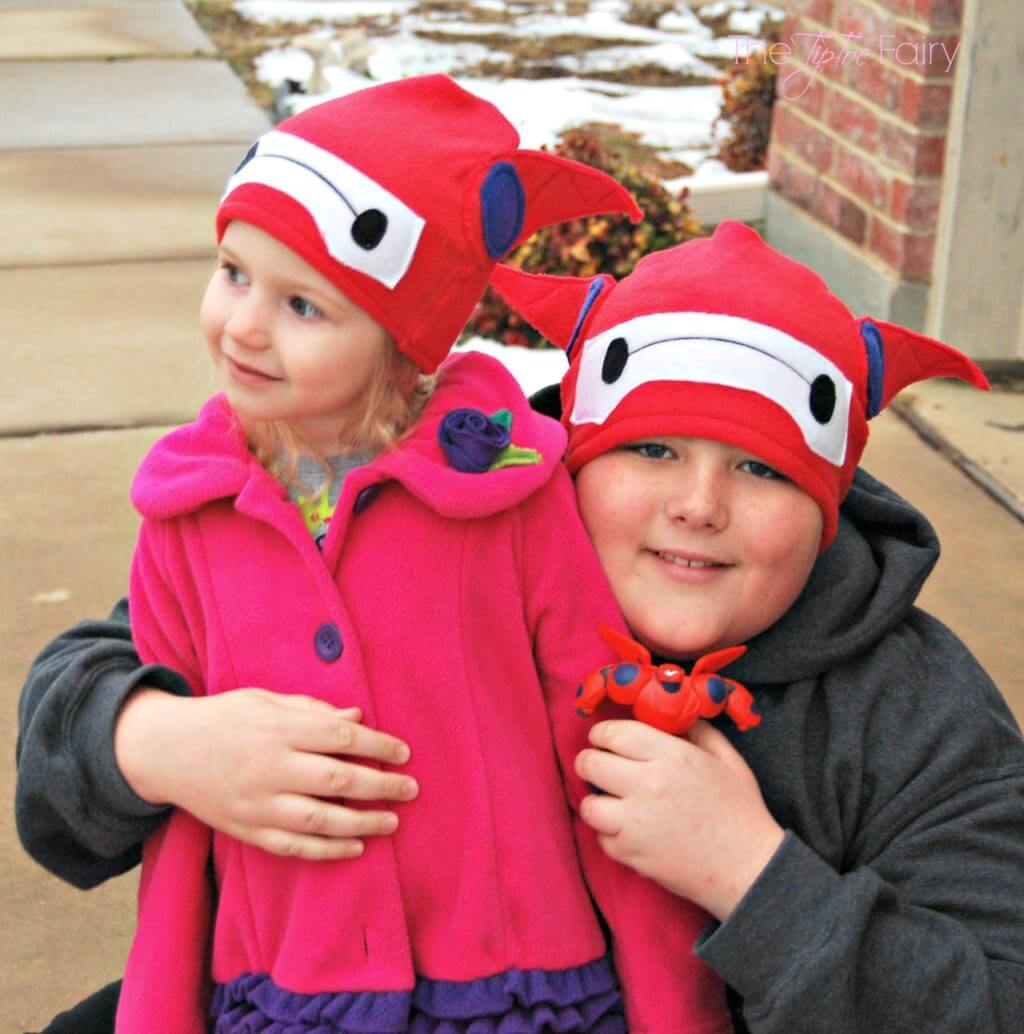 Have you seen the movie yet? Who is your favorite character?

This is amazing! I really need to get a sewing machine–my kiddo would love a hat like this. You’re so talented!

Such a fun and creative project! My children have watched Big Hero 6 about four times this weekend. We LOVe it!

We haven’t seen the movie yet, but I can’t wait!
This fleece hat is super cool.

Oh my goodness, this is SO stinkin’ cute! Both of my kids would love this hat!

You always have the BEST tips and tutorials! These hats are so cute and I love how quick and easy they are to make!

This is so adorable! Is it very hard to make? You make it look so easy. I have a couple of nieces that would absolutely love me to make these for them, but I’m not very crafty. They look so cute!

I don’t think it’s too hard. Fleece is usually very easy to sew with. The only part that can get a little wonky is attaching the ear things. It took me two tries to get them the way I wanted.

They turned out great! Such a great idea. Thanks for sharing.

What a cute project and the movie looks so cute!

These hats are SO awesome, I need one for when I visit family back in the midwest and if my niece and nephew see me wearing one they are going to want one as well! Looks like I Have some crafting and sewing to do! 🙂

This is so cute! My daughter would flip over it!

Stephanie, you are SOOO creative, this is such a cute way to celebrate the dvd release!!! My boys would LOVE these hats.. pinned!

How stinking cute is that hat! I love this idea and will have to make one for my little guy!

This hat is so adorable! We recently watched the movie and have been doing the robot high five ever since. I need to pin this and make for next year’s first Wisconsin winter!

This is perfect timing because my nephew is having a Big Hero 6 party next week!! Will have to share this with my sister in law 😀

This is so cute! So glad I found your blog! I love this hat and my son loves the movie so this is perfect. Great job!

What a cute project! I know a few little ones that would love one!

I don’t really sew but with your tutorial and stencils I bet I could do this- it’s so adorable and perfect for the weather back East right now! #client

I am really enjoying all of these be hero six crafts and projects. I’m looking forward to doing some of them with my kids

I am really enjoying all of these big hero 6 crafts and projects. I’m looking forward to doing some of them with my kids