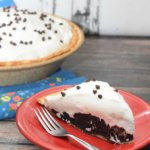 I recently was reading a conversation in a Facebook group about cookbooks.  One person said they would never ever buy a cookbook without photographs.  I thought to myself, “are you kidding?” Some of the best cookbooks I own are those church cookbooks with recipes typed on a typewriter and photocopied into a spiral book.  Those cookbooks have hidden gems in them, and there are certainly no pictures.

One of those cookbooks had a variation of an old fashioned chocolate cream pie.  I shared a similar recipe way back in 2011 when I was first learning how to share recipes on my little ol’ blog.  I called it To Die For Chocolate Pie, but nowadays I like to call it Hershey’s Cocoa Cream Pie because it’s best with cocoa, not chocolate.

Usually I share quick and easy ideas here at The TipToe Fairy, but every once in awhile I share something that takes a bit of effort.  Those few recipes and crafts I share that take a little longer are usually so worth it.  This is one of those things.  This pie is rich and delicious.  I only make it once a year during the holidays because it really is such a special treat.

I’ve been making this pie since 2011, and I can tell you a few things.  First of all, you have to stir constantly when it’s on the stove.  It has a lot of cream, milk, and eggs, which can be ruined if you don’t constantly stir.  Second, you will think you are going to stir that pot FOREVER! It sure feels like it, but as soon as you start to feel the filling thickening as you stir, you know it’s getting close.  Watch closely for the boiling because as soon as it boils, set a timer for just 1 minute and then take it off the fire and finish the recipe.

This is an Old Fashioned Cocoa Cream Pie.  It takes a little bit of work compared to just making an instant pudding pie, but tastes so amazingly rich, it’s worth it.

You can also make this pie with a chocolate cookie crust.  You can purchase one already made in the baking aisle.  Or, you can make your own with crushed OREO cookies and butter.

Have you ever made an old fashioned chocolate cream pie? There is just nothing like it.  A chocolate cream pie made with instant chocolate pudding is okay in a pinch, but when you take a bite of this Cocoa Cream Pie, you will see how worth it is to make this pie! It’s so rich, thick, and creamy, you will melt!