[disclaim]This is a sponsored post written by me on behalf of Gluten-Free Cheerios.[/disclaim] 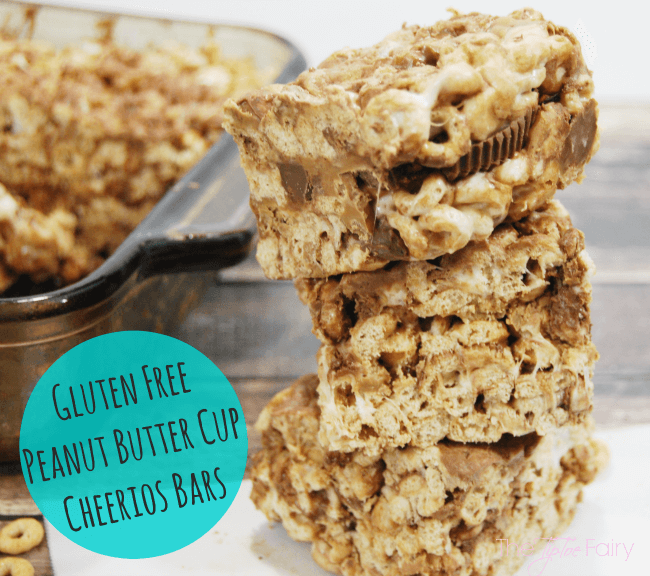 Did you know that five flavors of Cheerios™ are now gluten free? You can learn all about how they make sure their oats are gluten free HERE. It’s really fascinating!  Cheerios sent me boxes of their gluten free cereals to try, so you know what I had to do? Make something yummy with them! 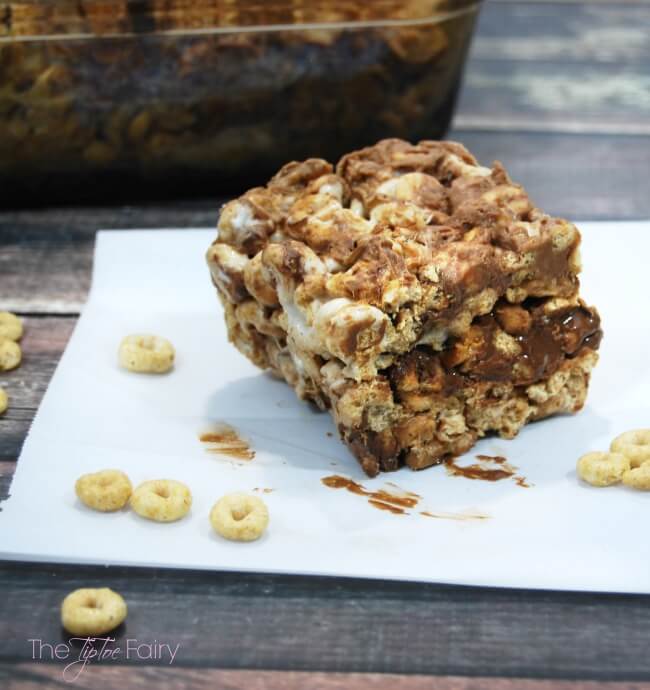 I whipped up some Gluten Free Peanut Butter Cup Cheerios Bars. They are perfect for the peanut butter cup lover, AND they are totally gluten free!

While my husband doesn’t have a positive gluten allergy, he is very sensitive to it, so I try to limit gluten in the things I make. I was thrilled when I found out Cheerios had five of their flavors completely gluten free. Yellow Box Cheerios™, Honey Nut Cheerios™, MultiGrain Cheerios™, Apple Cinnamon Cheerios™ and Frosted Cheerios™ are now all Gluten Free. You can find the label right on the box! 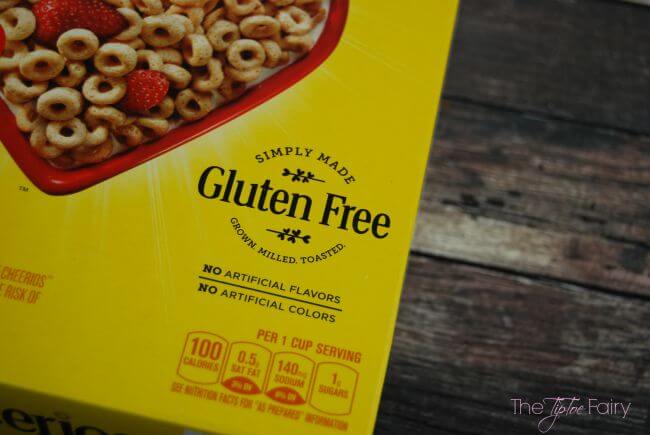 I love Cheerios. It’s one of my favorite cereals for breakfast. I try to stick with oats for breakfast cereal because it is much more filling and full of protein to get you through the day. Cheerios is not just great for breakfast, but it’s perfect for after school snacks or late night snacks, too. 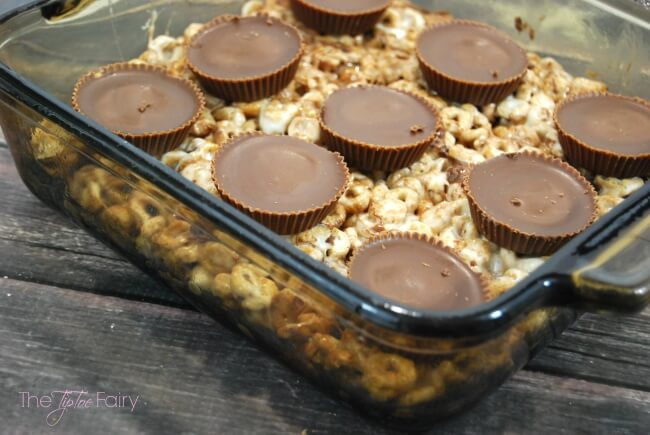 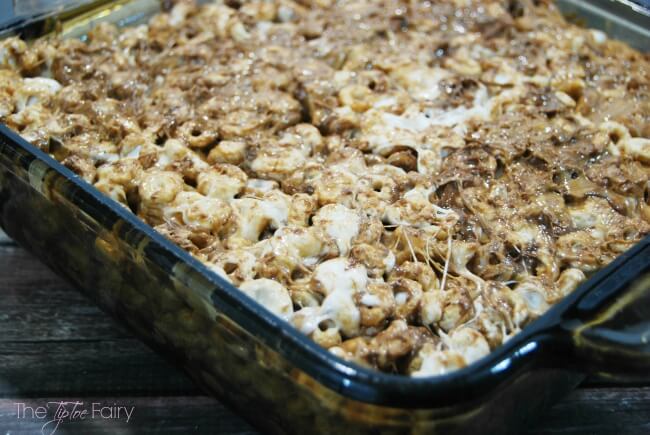 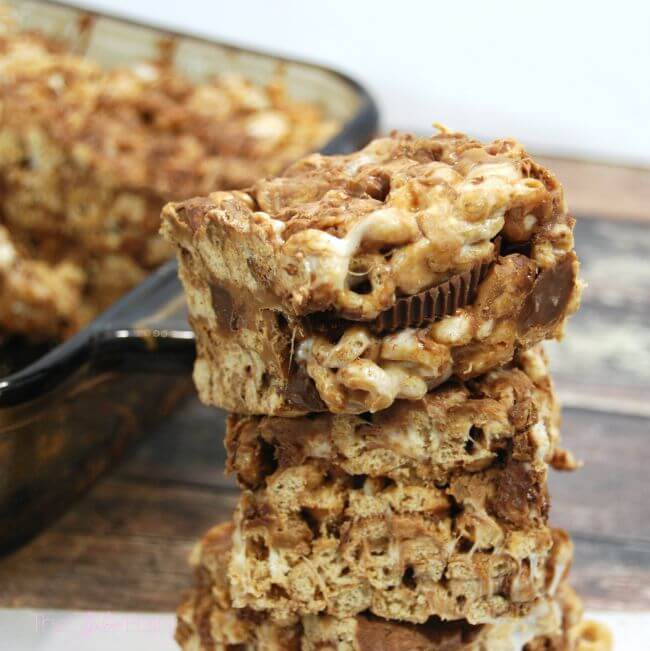 Why are they making Cheerios gluten free now?

It began with Phil Zietlow, an engineer at General Mills for more than 50 years. When he discovered his daughter-in-law, Joyce, was diagnosed with Celiac disease, Phil set off on an almost 6-year mission to make Gluten Free Cheerios.  About one percent of the population has Celiac disease, but nearly 30% of the population is avoiding gluten. Now General Mills wants everyone to be able to enjoy Cheerios!

How are they making Cheerios gluten free?

Gluten Free Cheerios were achieved by changing the ingredient-sorting process — not the ingredients themselves. There is one exception – MultiGrain Cheerios – which was reformulated to include sorghum and millet instead of wheat and barley.

You can find Gluten-Free Cheerios by looking for the Gluten-Free seal on packaging. It’s beginning to appear in stores now, but will be almost fully available in September.

If you have gluten sensitivities, click HERE to learn more about Gluten Free Cheerios!

This is a sponsored post written by me on behalf of Gluten-Free Cheerios.

Goodness that looks YUMMY!!! I love Cheerios too! My whole family does. My husband loves the honey nut kind. I like all of them 🙂
My daughter likes the cinnamon best.
Love this recipe thanks for sharing!

The only cereal my husband will eat is Cheerios. And you have taken a great cereal and made it even better by adding my favorite flavors – chocolate & peanut butter. This recipe is a keeper!

Oh that looks delicious! Now are the peanut butter cups and marshmellows gluten free? Did you use the reeses kind, or a known gluten free brand?

Oh we love all Cheerios products in my family. These look like a great snack to make for a family cozy weekend at home.

I love the looks of these and that they’re made with one of my favorite cereals, a big plus. Thanks so much for sharing this recipe

This looks oh so good! Will have to give it a try 😀

I don’t worry about having to eat gluten free–I have to worry about carb and sugar content (diabetic). I am glad that Cherrios came out with Gluten free for those who those who can not tolerate it.

Really craving for this now. Love this bars! Awesomely delicious!

Now that’s a great way to mkae Cheerios. I could def. get into this for the fam.

Yum! I bet I could use the high protein Cheerios to make these. They look so good!

yum these look and sound delicious. My kiddos and I love Cheerios so we have may have to give these a try asap!

Okay, so totally pinned this to make with the kiddos! Chocolate and peanut butter is one of my favorite flavor combos and Cheerios are always in our pantry!

this is right up my alley. also i have been eating tons of gluten free food lately and it is really good.

This sounds like an amazing treat to make the grandchildren next time they come over! Thank you for sharing! 🙂

So funny that you posted this. I just watched a Cheerios commercial and was so happy to find that they were gluten free. This post makes me want to run out and buy a box right now!

This recipe is easy to make. My kids would love it. Thanks for the recipe:)

I just love gluten recipes! Thanks for sharing!!

Sounds and looks delicious! And it’s Gluten Free too-awesome! I’m always looking for healthier snacks for me and the boys!