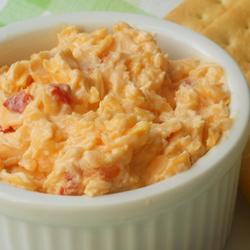 Mmm…cheese.  Delicious cheese.  Today’s Make It Pinterest is a recipe for Pimento Cheese.  Here is the original Pin I had.

My son loves pimento cheese, but I’m a cheapskate, and I hate paying for it.  I figured it was something I could probably easily make at home and probably for half the cost.  I went to my favorite go-to recipe site..Pinterest ;P and found a recipe I thought looked pretty straightforward.  Mr. E was going to be my guinea pig to see if it tastes like the real thing, or close enough.

While we were visiting my parents a couple of weeks ago, I was telling my mom my plan and what the recipe involved.  She is also a pimento cheese lover.  She started pulling out things for me.  I said cheddar cheese.  She said No, Velveeta and handed me a bag of it.  I said mayonnaise.  She said No, Miracle Whip.  I said a 4 oz jar of pimentos.  She said, No, you always need twice that much and gave me the jar of pimentos she had in her pantry.  Then, off I went back home to make a batch with the original recipe and her ingredients.

This is an adaptation of the Pinterest recipe. My little guinea pig, Mr. E, loved it just as much as the name brand stuff.  He said it tasted a bit different but still the same.  When I asked which one he liked and told him not to worry about hurting my feelings (he’s my sweetheart kid, hates to hurt my feelings), he said he still prefers the homemade version because it’s just so good.

Add all ingredients to a large mixing bowl.  Then, mix thoroughly.  You can do this by hand or with a mixer on medium speed.

Store in an airtight container in the fridge.

In determining the cost, based on my ingredients, it costs me half the price to make it as buy it.  The added bonus is mine doesn’t have all the preservatives in it.

Make Your Own Hanging Dish Towels

I am not sure if I have ever tried pimento cheese, I know my parents loved it when i was a kid. I need to try it!!

Mmmm. I love pimento cheese with Ritz crackers! Thanks for the recipe!
Heidi @ handmadefrenzy.blogspot.com

This looks and sounds delicious!!! We would love it if you would link up at our linky party:
http://www.lifewiththecrustcutoff.com/two-girls-and-a-party-linky-party-20/
Live every Wednesday to Sunday.
Hosted by:
http://www.lifewiththecrustcutoff.com/ Parrish @ Life with the Crust Cut Off
http://thissillygirlslife.com/ Dana @ This Silly Girl’s Life
We hope to see you there!

Pimento cheese is one of my favorites…especially toasted! I’ve tried to make my own, but it just never had the right flavor. Just pinned and can’t wait to try!

Love this ! After reading the ingredients on “store bought” I decided to make my own too. I used a pkg. of 3 types shredded cheddar, sm. jar pimento, mayo and pepper. It was really good but I think I’ll try adding cream cheese next time.

Interesting. I’ve not ever eaten this. It looks good though, a novel idea for a sandwich 🙂 Krista @ A Handful of Everything