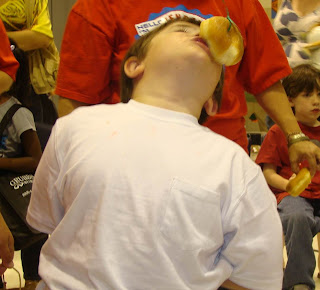 We went to Mr E’s Fall Festival tonight, so costumes had to be done a week early – during my midterms, when I also have an 8-10 page paper due next week, not to mention the neighborhood wide garage sale I signed up for next Saturday – plus my stupid professors are still requiring us to post our regular ol’ homework (WTF?).  AAAAAHHHH!!

Here is a silly pic of Mr. E attempting to eat a donut on a string.  He got icing literally up his nose and in his eyeballs, but he won!

This year my only real costume to make was Miss Em’s.  She informed me last week she wanted to be a 1950s car hop, complete with roller skates (thank goodness we already have those). Mollyball is going as a spider – a super easy costume I made for Mr E for his first Halloween.  We are debating on calling her Charlotte or Aragog.  In lieu of my husband’s love for all that is Harry Potter, I think we are going with Aragog.

You can’t really see her costume (I’ll take a better pic tomorrow), but this is such a cute pic of her and daddy I had to share.  For the baby spider costume you can easily make this in a couple hours with a serger.  Make a black interlock hoodie from your favorite hoodie/sweatshirt pattern.  Before you sew up the side seams, make 4 tubes stuffed with fiberfill the same length as arms and put two under each arm, sewing them in the side seam.  Then in about 3 locations, take black embroidery thread and run it through to connect the 2 fake legs with the arm hole for stability.  Then make a matching pair of sweatpants. Voila – baby spider!

Now for Miss Em’s Car Hop costume.  I had so much fun with this, and used no patterns (um, well I used a pattern I made for the hat, but other than that – no patterns).  I didn’t make the shirt.  We used one of her old t-shirts that was almost too short, and I ironed an “E” on the shoulder. 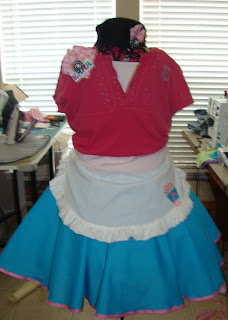 Her skirt is a simple circle skirt.  I added a ribknit waistband just to finish it easy.  I also trimmed the hem in a pink polka dot grosgrain ribbon.  The petticoat, which there is not a picture available yet, is a layered skirt.  It consists of a rib knit waistband, a 3 inch woven layer, than a 6 inch layer of nylon tulle and another 6 inch layer nylon tulle.  The outer layers of tulle are the scratchy stiff stuff – they really add bulk to make it poof.  The top tulle layer is three strips sewn together of the stiff tulle, gathered – each strip is  6 inches x the width of the fabric.  The bottom tulle layer is twelve strips sewn together of the stiff tulle – same measurements.  Then, I did the exact same thing with the softer tulle under those and attached.  Then the side seam was sewn together, and finally the knit waistband was attached. 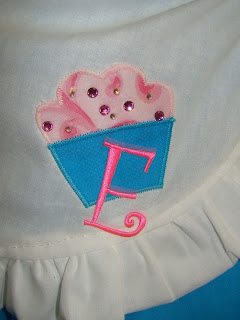 The apron was next.  I basically cut a rounded half apron shape, then cut several strips 4 inches wide x width of fabric and folded over and made a ruffle, then attached it.  Next, I wanted straps big enough for a decent sized bow.  I cut straps 3 inches x the length of fabric, attached and then topstitched along top edge of apron.

From other 1950s car hop aprons, I saw examples that had all kinds of things like poodles to “’50s” appliqued on one edge, but I thought a cupcake was cute and was sort of carhop-y.  So I drew my own applique, sewed it, then blinged it with hotfix crystals, and finally ironed on the “E” to complete it. 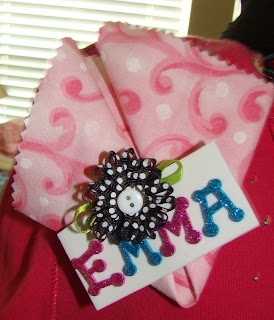 Next, we needed a name tag.  This is super easy.  I cut a square of the “icing” fabric from the cupcake and used pinking shears.  Then folded it as above, added a couple dots of hot glue to keep it that way.  Next I made the name tag out of foam and foam letters, and added embellishments, then hot glued a pin backing, and attacked the whole thing to the shirt.  (That adorable ribbon flower embellishment was found in a 2 pack at Joanns near the trims and ribbons.  They had all kinds including adorable pink ribbon elephants – so cute!) 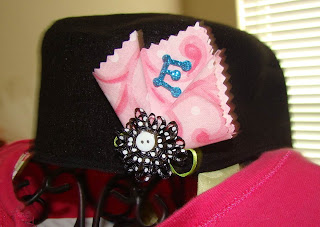 The thing that scared me the most was the pillbox style hat.  I used this wonderful Threadbanger tutorial and pattern.  I made mine backwards because I sort of wanted a cross between a pillbox and garrison cap to give it a waitress-y feel.  Surprisingly, it was very very easy, and came out exactly as it should.  I was down to the wire on this one.  I had one chance and 30 minutes before it was time to pick up kidlets from school.  It was so much fun, I’m tempted to make one myself just to wear (hubby has a thing for women and hats, lol).  They are super fun to embellish too.  I punched holes in either side and attacked clips to Miss Em’s hair.  For the hat embellishment I made a tiny pinking sheared square, folded it, hot glued it, and added the ribbon embellishment and one last sparkly foam “E.”

Total cost of car hop was  probably $20 for embellishments, fabric for skirt and hat, and tulle.  Everything else I already had in my stash.

Later this week I will get a picture of all 3 together.  Mr. E was a home grown Jedi with white t-shirt, black sweatpants and last year’s mama-sewn Harry Potter robe (He was Draco), topped off with a belt and a lightsaber.

Waldorf Dolls – where to get wool stuffing

How to Make an DIY Easy Pennywise Clown...