These Incredibles 2 cinnamon rolls are fairly easy and start with a box cake mix! 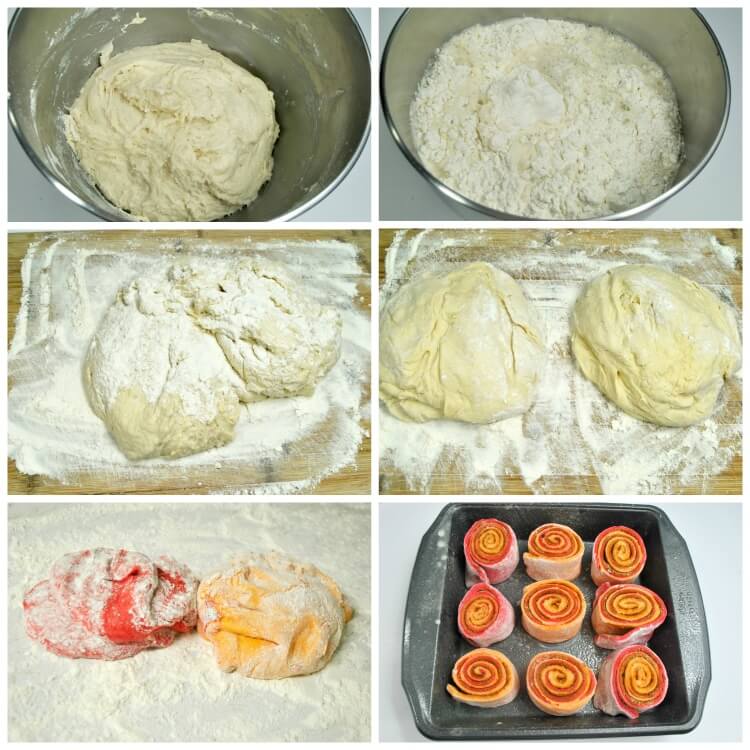 Once combined, place dough onto a floured surface and knead until combined and the dough bounces back after touching it.

Split dough into two halves and add red gel food coloring to one dough. Knead it until the color is equal throughout.

Next, add the orange gel coloring into the second dough half and knead it the same.

Place both dough balls into their own large glass bowl and brush the 1 tbsp oil onto the top of the dough as well as the sides of the glass bowl.

Cover each bowl with a kitchen towel and let sit for an hour.

Once the dough has doubled in size, combine both doughs gently together then place it onto a well floured surface and roll  it out to 1/8 inch. This will give it a marbled effect.

Brush melted butter onto the dough and sprinkle with the cinnamon and sugar.

Place rolls into a baking dish and cover again for another hour.

At the end of that hour, preheat the oven to 350 degrees.

Bake the cinnamon rolls for 30 minutes.

Using an electric mixer, combine the powdered sugar, vanilla and whole milk together until smooth and creamy.

Sprinkle some of the incredible sprinkles onto the rolls.

Allow cinnamon rolls to cool for about 15 minutes before enjoying.